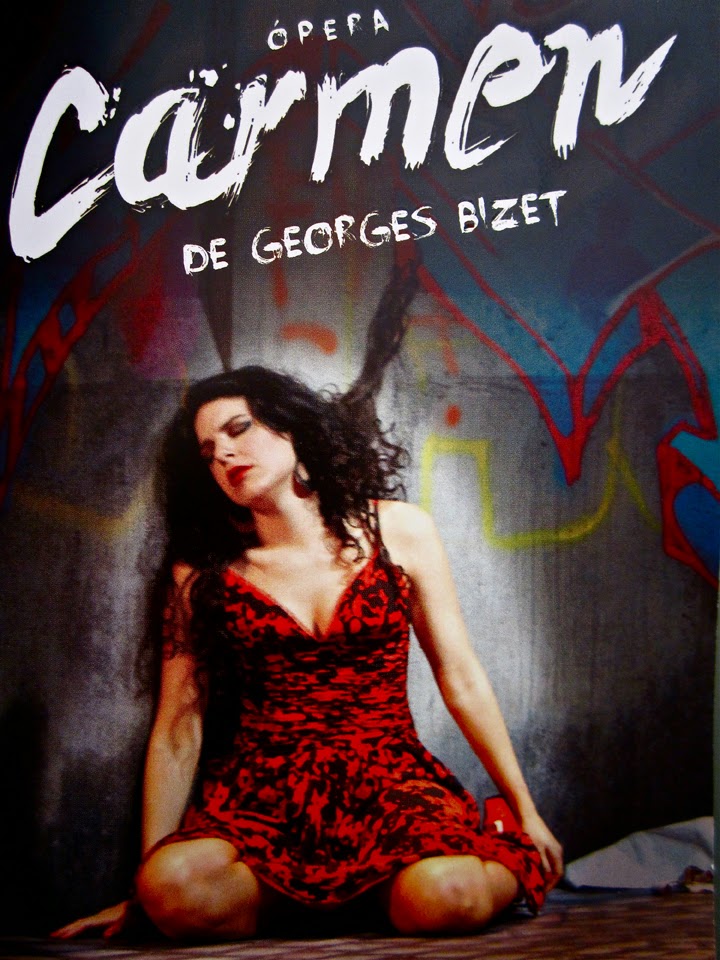 I was treated to a night out at the Opera!

It was nice getting back to Montevideo, the Capital of Uruguay and seeing it's many cool buildings. Many are lit up at night. 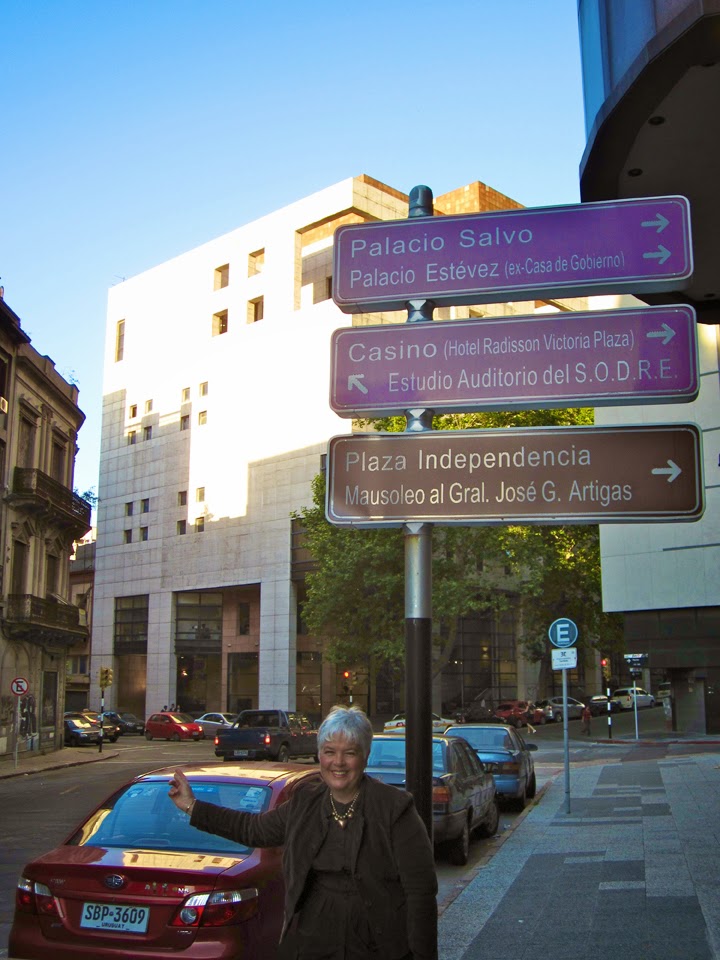 Also, it was nice to have people who could navigate it's many streets and do the driving! 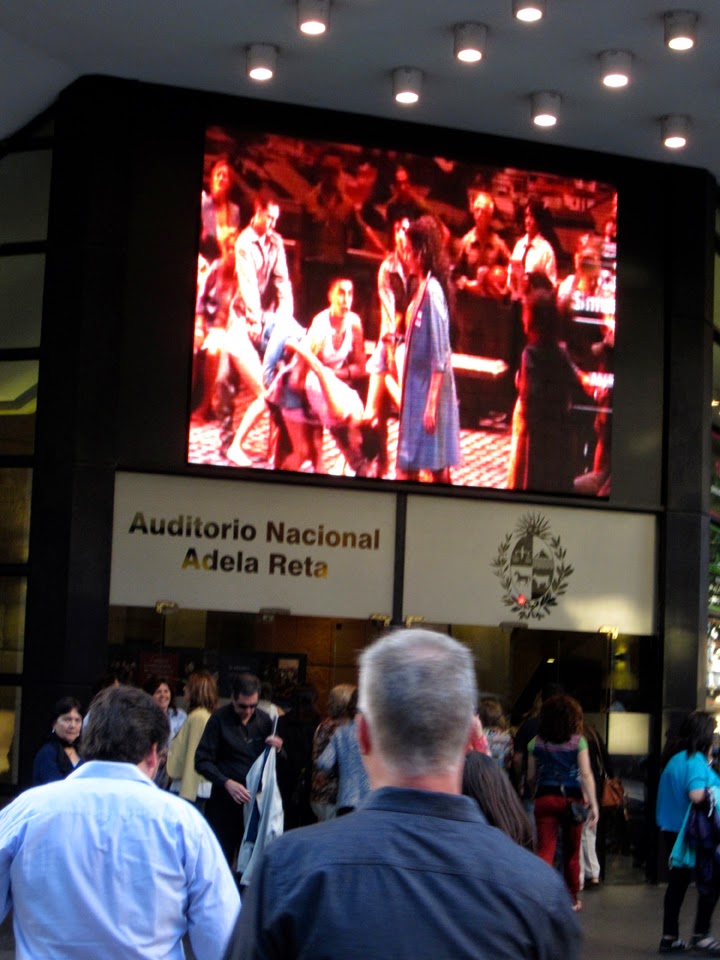 The theater that the opera was being held in was not the Solis which I did a post on before but rather, it was held in the National Auditorium Adela Reta belonging to the Sodre group. Personally, I hate having to remember so many acronyms. Sure, I know that LOL stands for "Laugh Out Loud" in todays written correspondence and that WHO stands for the World Health Organization but in Uruguay where everyone seems to know what  SODRE stands for, well, I just had to research it so I could know too.

In 1929 this group was formed by law here in Uruguay (law 8.557), hey! I read Wikipedia when needed. The acronym stood for Servicio Oficial de Disfusion Radio Electrica. The name has changed over the years to include Television. (Servicio Oficial de Radiotelevision y Espectáculos).

Okay, so that leaves me with what Adela Reta means. Searching the internet, I found that, it was the name of a very prominent woman here in Uruguay . The theater was named in homage to her. She was born July 9th, 1921 and lived for 79 yrs. until her death on April 3rd, 2001. Uruguayos highly value education for all. Adela was a Lawyer specializing in penal law and rights. She was also a professor and into politics. Her career credits are as follows:
1967-1974, She was President of the Counsel on Children.
1985-1990, She was Minister of Culture and Education.
1990-2000, She was the Director of the Sodre. (until a few months before her death).

The Auditorium, named Adela Reta, has its own story to tell. It was once known as The Teatro Urquiza. Urquiza was the owners' name, an Argentine man named Dr. Justin G. de Urquiza. It took him 2 years to complete its construction (1903-1905). The Teatro Urquiza ran under that name from 1905 to 1931. After Urquiza, the Sodre group brought it and ran it from 1931 to 1971, under the name Estudio Auditorio del Sodre. that is until a fire ravaged it, destroying much of the musical archives and making it unfit for use (destroyed, September 18th, 1971).

It then sat, unused for almost 40 years (38) Finally, in 2009 on November 21, 2009, it was inaugurated. It is now named Auditorio Adela Reta (del Sodre) so it is still under the Sodre group who ran it for 40 years and then left it sitting burnt for those last 38 years. It is intended now as it was back then and during its almost 76 years of operation, to be a Center for Culture and the Audiovisual Arts.

The building was refurbished with good acoustics in mind. It is 2500 square meters. It has 2 concert halls, the main one is named after Eduardo Fabini, ( a Uruguayo, who was a violinist and composer, 1883-1950) that main hall can hold 2000 people. The much smaller hall is named after Hugo Balzo (a Uruguayo, 1912-1982). He was a great Pianist and there is a conservatory named after him. That is where the music of the cámara would be preformed as well as experimental works. There are cafeterias and exhibition spaces also located in the building.

Whereas, the Teatro Solis is a throwback to the Arts bella era with antique yellowed walls and gilded moldings, this Auditorium is very modern and streamlined. 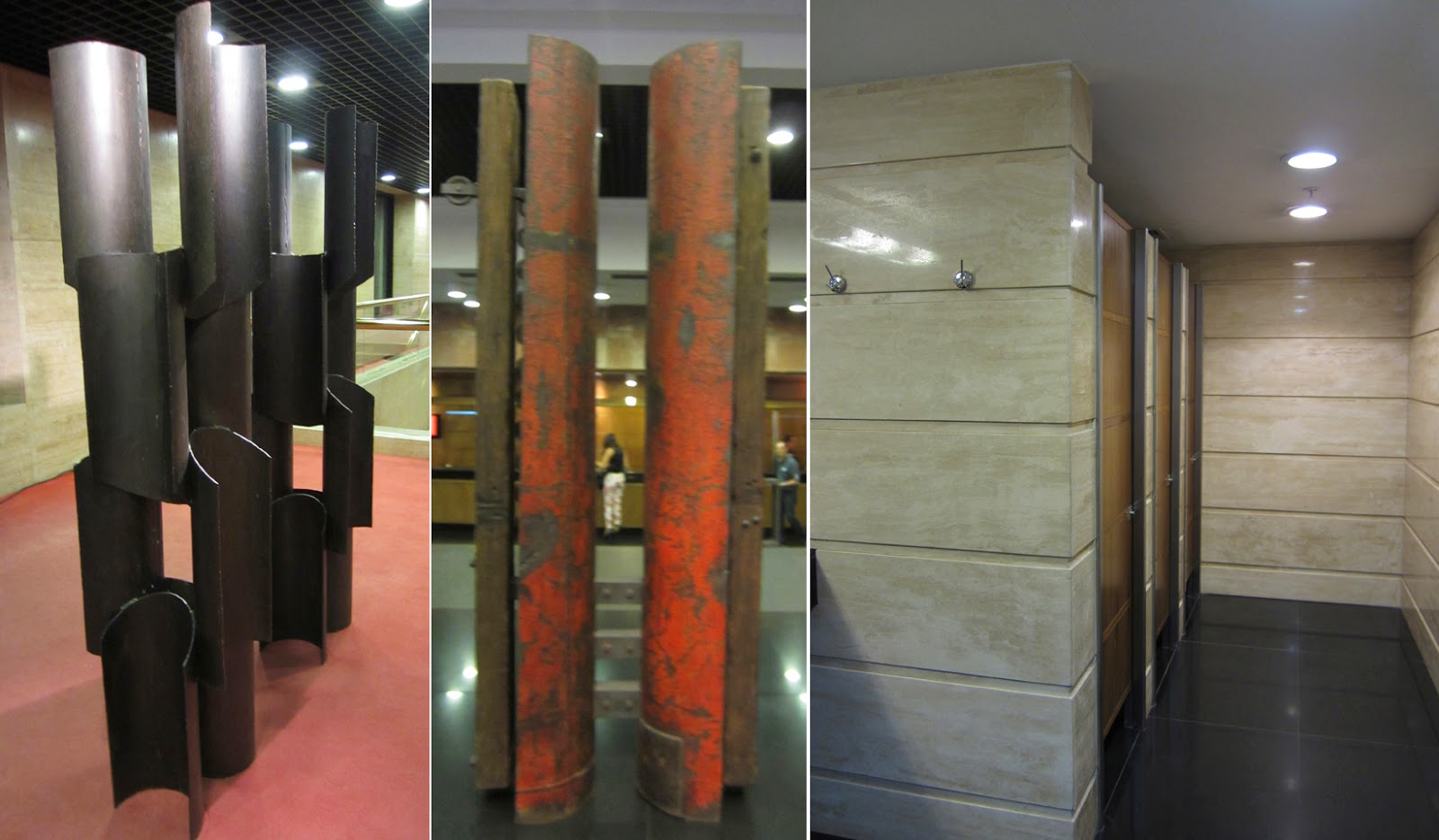 It had random modern sculpture pieces scattered here and there.
The ladies bathroom was a very manly monolithic sort of space with its chunky style of granite. 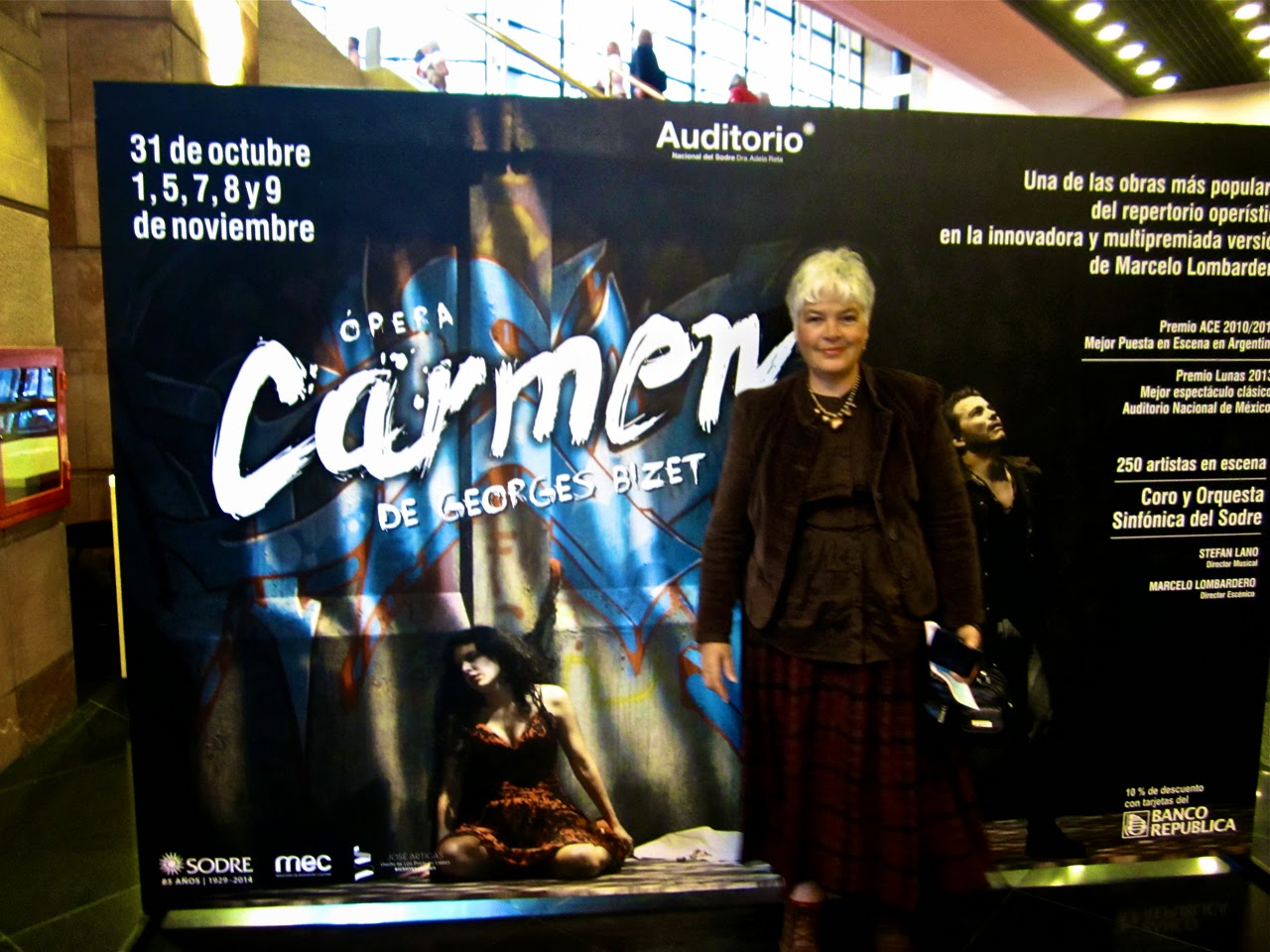 Getting back to the actual opera, "Carmen" the brochure said "Carmen, reloaded". Carmen has been performed in various ways since it was first written by George Bizet (1838-1875) first performed in 1875. It is written in 4 acts and sung in French!  The scenes take place in Seville Spain.

There was a large rectangle screen high above the stage and out of view from the singers, where the words sung in French were translated into Spanish for the audience. You had to look way up to see it.

There was a 40 piece orchestra. I love the fact that Musicals, plays and operas have live music for all the scenes and I appreciate all of the hard work that is done by the musicians just below the stage and out of sight. 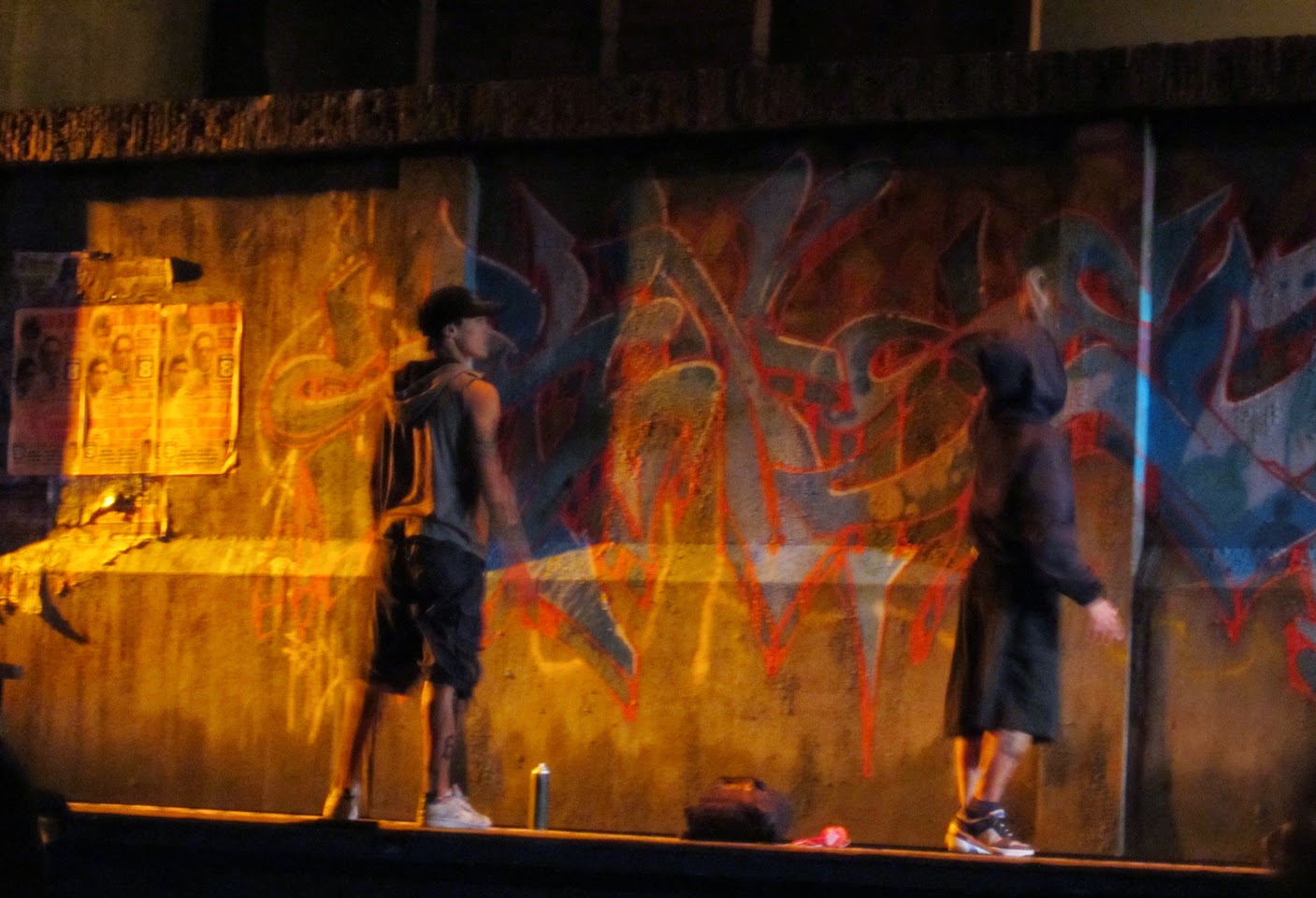 The reason this version of Carmen was called, "reloaded" was made plain when the opening scene started out with "Taggers" tagging or spray painting a factory wall. This Carmen was to reflect modern times in Spain. There was also a scene with some break dancers spinning on the floor! 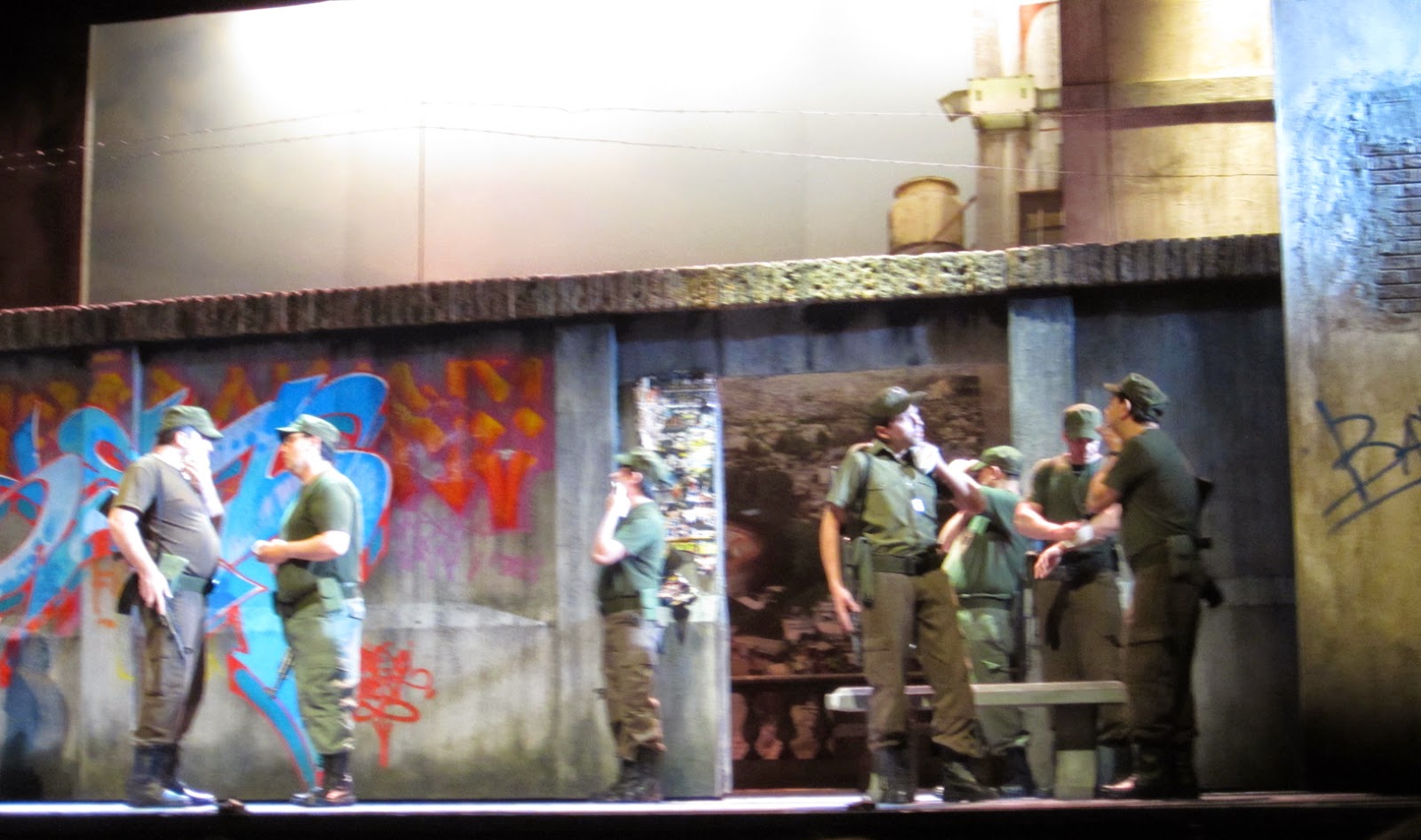 You'll have to research the opera yourself but it takes place in and around a cigarette factory, The workers are women and the place usually has soldiers hanging around outside of it to catch a view of the ladies.

Apparently it is very hot inside the factory and the women who all wear uniform coats tend to open them up to catch the breezes thus displaying their under garment slips. They also probably get to smoke as many cigarettes as they like because there is an amusing scene with them coming outside the factory on their break, smoking away, with slips brazenly still showing, despite the local townsmen looking on.

Of course, the story is really about a brazen gypsy woman, Carmen (naturally, the lady in red!) who captures the attention of  Don José, one of the soldiers. The opera singer performed her character with spunk and attitude.

One of the best singers in the opera was the childhood friend of soldier Don José, (performed by, Paulina Gonzáles Melgarejo. She is from Chile).  She was awesome! That night, Don José was performed by Dante Alcalá a Mexican opera singer.

Maybe, it was a bad night, but our group felt that the matador and rival love interest of Carmen, Escamillo (represented by Marcelo Guzzo) was not very good. I thought it was just me but the others thought he should have been better.

Also, during one scene, he sang at the back of the stage and it was hard to hear him. The director should have moved his solo front and center in our humble opinions!  The other scenes where he was closer to the audience were easier to hear. 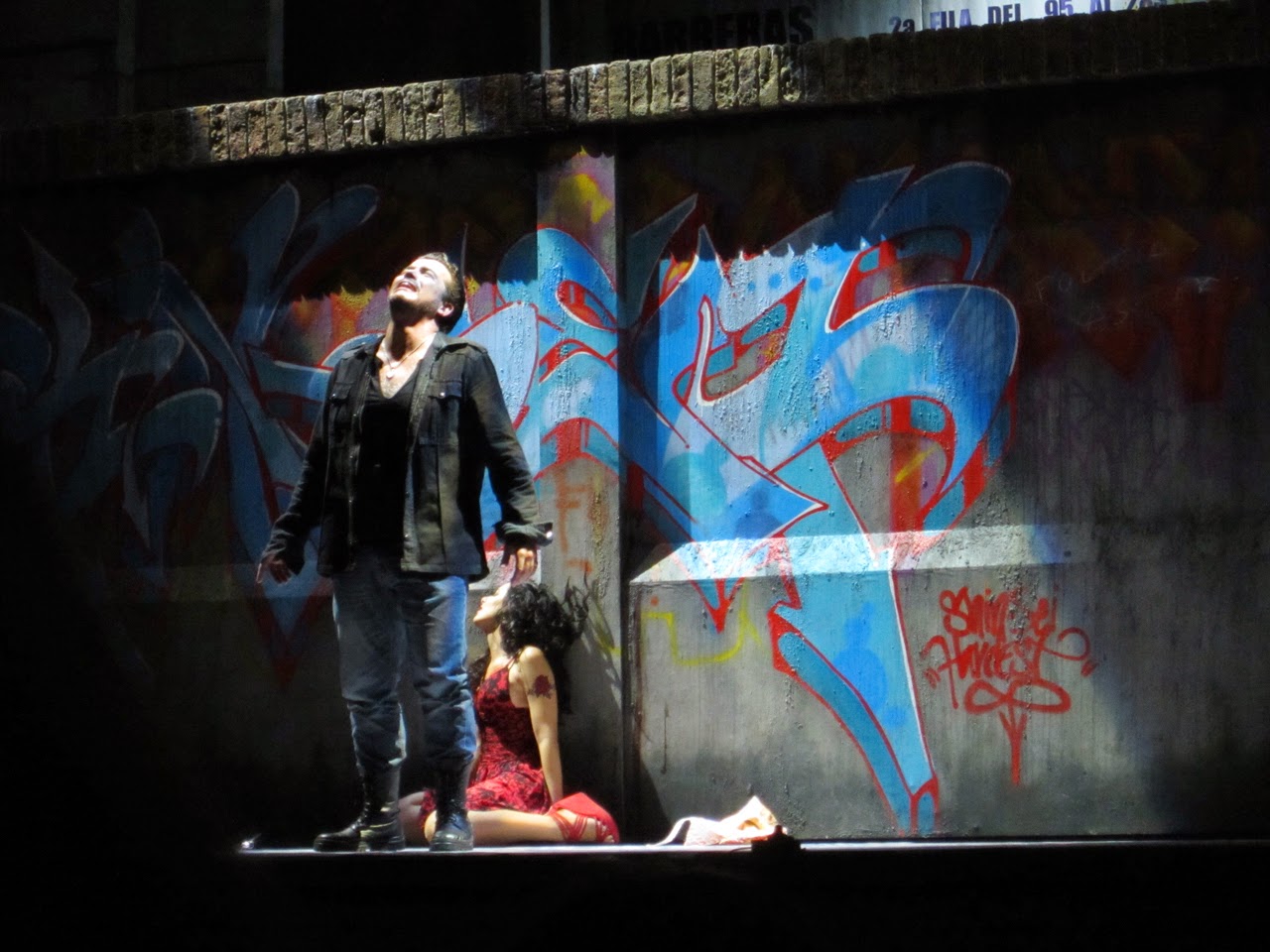 The supporting singers were all very good and when the cast sang together it was impressive and wonderful. I won't tell you how the opera ends incase you don't know the story, but it was dramatic.

At the end, everyone came out and took their final bows. It made me think, wouldn't it be nice if after a long hard days work, we could then be allowed to take a bow while others clapped in applause, approval and acknowledgement of our efforts? So tonight, I'll close down with a bow. It's time for dinner but wait , did I hear some applause, well maybe, just maybe I did!
Posted by Denise at 5:33 PM 2 comments: