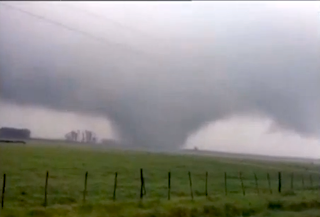 Okay, it happened 4 days ago. I should have blogged about it sooner but after my Sept. 19th post called "Gone with the wind", I wondered if anyone really wanted to read another weather post. Then I remembered, hey, some of you readers like to keep up with what's happening here in Uruguay so here it goes.

Only 1 month after our big wind storm of September, the Meteorological department started to issue, on Saturday, some warnings of an impeding storm due in a few days. Heavy rains and winds were forecast.

Alerts! For the departments of Colonia, San Jose, Canelones (our community/county) Lavelleja, Treinta y Tres and Montevideo that meant being on "ORANGE" Alert. The worst was expected from 0 hours Monday night (Military time) to 21 hours. About 5 inches of rain fell in Colonia on Monday.


Due to winds and torrential rain, in the town and area of Artigas, 30 people were evacuated along with a long list of other people in other places.


However, "RED" Alert warning status was given to the Departments of Maldonado and Rocha! It was predicted that winds from between 75 Kilometers (46mph) up to 120km (75mph) and occasional gusts higher than that would hit those 2 counties/departments.

Despite being on "RED" alert, nobody could imagine that on Monday the 22nd of October, Rocha would experience the phenomena of a Tornado touching down! According to the newspaper EL DIARIO, at about 5 o'clock in the afternoon a 300 meter wide (1/5 of a mile) tornado appeared. It broke 2 houses apart and caused a horse to fly away! Sadly it crushed a calf as well. 14 people were left homeless there. Amazingly despite much destruction, no human lives were lost. Hurricanes and Tornados are not usually experienced down here in Uruguay. Strong wind and gusts, yes. We also experience short bursts of heavy rain sporadically, along with a lot of frightening thunderstorms, but a tornado and last month's Tropical storm were unusual.

As mentioned we were only on Orange alert in Canelones so thankfully for us it wasn't as bad. Wally can sleep through anything but since we still have 3 tall pines trees right outside our bedroom window I found it hard to relax and sleep during some of the powerful wind gusts that came during Monday night.

The beach by our house showed the effects of the wind and rain. The water was blacken, full of wood bits and who knows what. While I didn't see a flying horse go by, the odd sight of a dead chicken being washed back and forth by the surf made me stop and pause (later, Wally made a lame joke about "Chicken of the Sea" the name of a North American canned tuna brand). 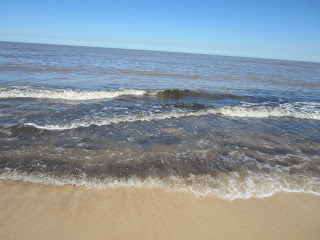 Dead Cat fish, from some stream were washed onto the shore and sadly lots of discarded used plastic bags which was proof that using canvas/cloth tote bags for shopping can help the environment. What surprised me was that we've never been as fully warned about the use of and proper discard of string and rope as an environmental aid. I have never before seen as much jute, string and rope as I did laying on the beach after the storms aftermath.

My normal route to the beach using a little foot path had to be circumvented because the wind and waves of the storm had caused a sharp sand-shelf drop off.  I was too much of a wimp to go leaping off the short ledge. About 2 houses further up the street away from me is a concrete set of stairs built by the city down to the beach so I decided to used those. 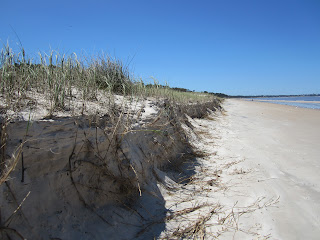 I realize that I must still have "a glass half-empty" mentality left over from North America. After a week of moping inside because of rainy windy weather, I was delighted to be walking in the sun shine again. However, I just couldn't enjoy this nice day at the beach as littered and kinda stinky as it was. Still the Uruguayan people have a way of enjoying what they can, where they can.  I couldn't help but take a photo of how many were really enjoying the day at this same beach. The difference in attitude must be the result of all that mate drinking, which I haven't gotten a taste for yet.

Summer season is about to start and the city always bull-dozes the beach to clean it up from trash. I will enjoy the beach after cleanup. With my snooty attitude, I went home and gave my dogs a flea-shampoo and bath knowing that it would be quite awhile before I would be taking them back down to the beach and swim in the blacken water.

Still, I couldn't help feeling a little guilty when I thought back to how much someone else's dog (a Golden Retriever) was enjoying the beach despite the mess. Maybe, I need to start drinking a little Mate and appreciate that after a storm, even a tornado that in Uruguay life goes on, and Uruguayans enjoy life!
Posted by Denise at 10:13 AM 6 comments: 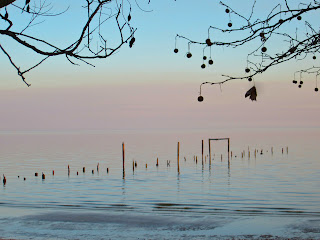 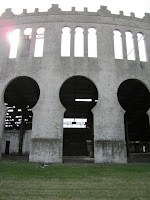 Real de San Carlos is just a stones throw away from Colonia del Sacramento where we spent our Anniversary weekend (about 5 kilometers away). I wanted to give it it's own post because this area has a unique history.

This area, called Real de San Carlos, was built at the beginning of the 20th century by Nicolás Mihanovich a real estate promoter as a tourist complex. It cost him an investment of some $1.5 Million (US), A lot of money in those days and it included a luxury hotel, a casino, a jai alai court, and a racetrack. Most interesting of all however was that Mr. Mihanovich built a Bull Ring into this tourist complex. Only the race track (horses) is still is up and functioning (People say entrance is $1 for men and women are free) I'll have to check that out next time. The Plaza de toros (bullring) opened on January 9th, 1910. It could hold 10,000 people. Bull fighting was outlawed here in 1912. 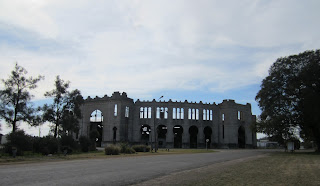 So you can see that the bull ring was only open for 2 years, it held only 8 bullfights in total. Urban legend has it that the then President of Uruguay, President José Batlle y Ordóñez once took his daughter with him to see one of the bull fights held there. Upon seeing how the bull was treated and then finally killed in-front of everyone she cried and complained so much to her father that the sport was then banned throughout Uruguay. He was an interesting President who fought for unemployment compensation, 8-hour work days, universal suffrage and many other things. 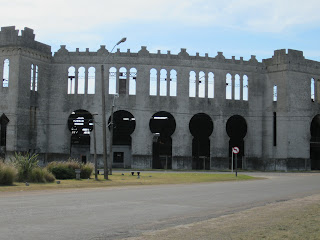 The design of the building is in the Moorish style with key-shaped entries and arrow shaped window and stairway openings. The building like so many other unfortunate ones here in Uruguay has been left to neglect and decay. The crumbling building seems to have been made of brick and cement with a fantastic iron structure holding it all up.

Of course, it has fallen into such a dangerous state that it is now closed for safety issues. Being the photographer that I am I shimmied under the chain link fence and took a look inside watching all the while for falling stones from above. 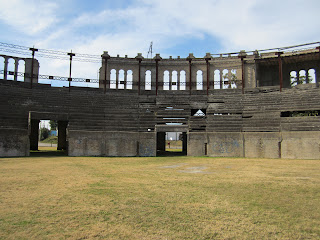 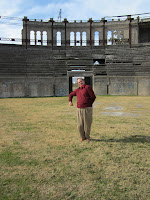 I am too much of an animal lover to ever want to visit an actual bull fight. To hurt the bull with lances is just cruel and mean. Just make the bull a little mad and maybe it's a fair sport but wounding it and killing it is awful. As some recent visitors to my house who have actually seen a live fight in Spain said "Yeah, We'll never go again, it was bad". When I entered the abandon ring  Wally saw that I hadn't been shot or killed so he ventured inside too for a photo opportunity. When would we ever be in the center of a bull ring again? Both Wally and I remarked how little maneuvering space was really there imagining that a wounded pissed-off bull was charging at us. Little wonder that bull fighters need a special breed of courage or insanity to face a charging bull. Their fighting costumes alone can be worth Thousands of dollars. For only 8 exhibitions, this bullring in Uruguay had some famous fighters of its time appear in this ring.

Real de San Carlos has a tiny railway museum across the street from this bullring with some restored rail cars. The sign for this museum says to keep your ticket, so I don't know if maybe this museum might be a part of the circuit of the ones in Colonia or not. The bus route of sightseeing that I mentioned in my previous post about Colonia stops here at the bullring and the train museum. It's 1 of the 10 points of interest. That's how we found out about the bus circuit. 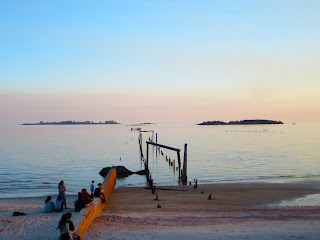 This post should have been called bullring and sunset because of all the pictures I wanted to include. After wandering around the bullring we noticed that the sun was soon to set. We headed to the beach to join the many others with the same idea of seeing the sun set over the water. 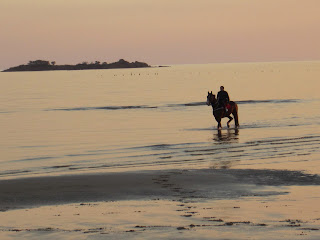 Slowly people gathered as the time grew nearer. Wally and I decided to go a little farther up the beach away from the others and we were rewarded by a memorable sight. A man was exercising his racehorse in the river at sunset. I snapped away!

Then as the sun finally set, we watched a small rowboat paddle off into the setting sun. 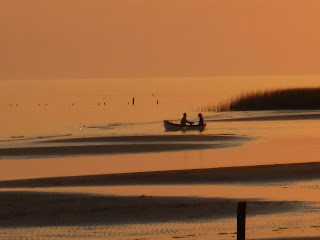 A fitting memory of a happy Anniversary weekend well spent in Real de San Carlos.
Posted by Denise at 1:05 AM 4 comments: