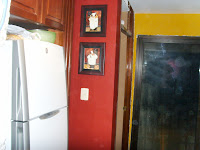 We turned a corner this weekend. Of course, a neighbor informed us that our next door neighbor has petitioned the city to rework the street and widen it. When they did all the work this summer, they left the street impassible by more than one car at a time. So we may have to take out a small portion of the bottom of the drive, if that comes to pass.

We also finally finished painting all of the walls and ceilings inside the house. We have selected colors that are stunning and vivid. I think with a very little work, our kitchen would look at home in any mexican restaurant. Since we have so much light coming into the house, we wanted to tone it down with rich, vibrant colors (sounds pretty cool, huh?) 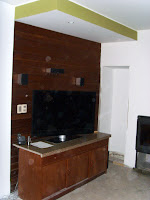 As with anything, the paint never looks like your estimation of the paint chip, and even if it did, it never looks like you thought it would. We both love the deep red in the kitchen and the green in the living room is very nice. I chose the marigold color for the kitchen and Denise has finally come to terms with it, this evening (with the help of a Fernet and Coke).

Monday the cabinet maker will bring in the first parts of the kitchen and we will be underway on the final stages. But for now, all of the very dusty work is completed and we are beginning the cleanup process which will take week. There is dust in virtually each and every nook and cranny (and we forgot to bring our cranny cleaners with us) which will take hours to remove. After looking at the photos, it looks like I had some dust on the lens, but I'm not reshooting. When we are completely finished, we will feature a complete walk through.

But we are thrilled at the prospect of actually starting to live here, finally. And just in time so that we are not having to do this work in the winter. It looks like next summer is going to be a good one!
Posted by Wally at 3:06 PM 6 comments:

First of all- no matter what you are thinking, it's not what you think. This is actually about a visit to the doctor.

For the past month I have been sick. At first just a simple cold, but for the last 6 or 7 days it has traveled lower, toward my lungs. Having had pneumonia once, I am more susceptible a second time, so I got a little concerned. In addition, I woke up early Saturday morning with sharp pains on my right side in the chest muscles. They lasted for about a half hour and in the morning were gone. I took an aspirin, just in case. So I decided to use our health insurance and go to the local clinic of Medico Uruguya in Salinas, to see what was going on. Pneumonia? Mild heart attack?

Saturday mornings the woman doctor who speaks perfect English is on duty. After close to a year, I would normally be comfortable trying to explain in Spanish, but I was feeling too sick and didn't have the energy for language. I was glad she was there.

After talking with her about the symptoms, she assured me that I hadn't had a heart attack. As everyone (except me, apparently) knows, a heart attack starts on the left side and can travel down the left arm. It was no doubt a sore muscle caused by the coughing I was experiencing. And after a brief examination, she said my lungs were clear and the infection had settled into the bronchial tubes. Bronchitis! Much better than pneumonia. So she prescribed a simple 3 pill, 3 day antibiotic, spent time telling me to keep warm, drink liquids and encouraged me to (wait for it.......) take my vows. Of course, when she explained it and wrote it down, it was much difference than I thought. The Spanish word is "vahos" and since "v" is pronounced as a very soft "b" (kind a cross between "v" and soft "b"), it sounds quite close to "vows". 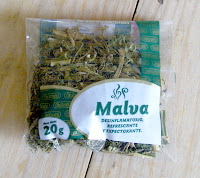 It is the old water vapor treatment, that she said was quite common here and my grandfather had probably used in the States. Simply boiling water and breathing in the vapors. After doing a little research, I found that it is a very effective treatment. And she told be to buy some herbs that are common here and boil them with the water.

Well, we are officially underway with the kitchen. Other than completing the tile, the kitchen is the last of the inside work. The ceiling has been completed (hiding all that ugly ductwork that we have been looking at for months). The electrician has finished wiring in new outlets, and lighting. And the first of our kitchen cabinets have arrived.

When we first moved in, the little cabinets on the left housed a 100L water heater and a broom closet and shelves. Since we installed a solar water heater, we no longer needed the space for an electric tank. We decided to relocate the refrigerator to that space and open up the kitchen area for a wrap around counter workspace. The cabinet maker installed the new cabinets yesterday and we are very pleased with the results. The slim cabinet on the right covers over the water valves and piping, and we still have a little cabinet on the left and some overheads for storage. Without the refrigerator hogging the rest of the kitchen- it looks huge! It really isn't however (its only 10' x 10'), but without the refrigerator, and with the open look we have kept, it looks much, much larger.

This coming week will see the kitchen walls finished and painted and then we will be awaiting the rest of the cabinets. We will have space for a small bar with 2 stools. We also had a fake beam built to separate the living room from the Kitchen, so we end up with 3 separate spaces, but the 8' openings contribute to a very open architecture.

It looks like our first anniversary for this house will be marked by having our house in order. We will be left with landscaping which we will set to work on in November and December. But the winter should be nice and cozy.
Posted by Wally at 8:45 AM 3 comments: 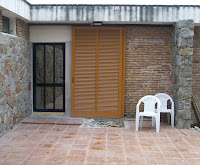 Each morning when I get up, I open up the house.  Let me describe what "opening up the house" entails. This will include all present and future installations. Now when we moved in here, I had no intention of installing bars and locking the shutters. Even now, while many people warn us about the need for security, I still do not really feel that all that we are doing is necessary. Nevertheless, since Denise is such a worry wart, we have proceeded with the "locking of the keep". So here is how it proceeds.

When the house has been "opened", the coffee can be made. By then I am bushed and need to take a nap. Its a big job "opening the house".
Posted by Wally at 8:02 AM 7 comments:

First Fire of the Year

Well, cooler weather is definitely upon us for these first days of May. In what corresponds to November in the States, we fired up the stove for the first fire of the year. As you can see, the fireplace is still in the framing stages, but this next week will see it all covered up and the pipes insulated. 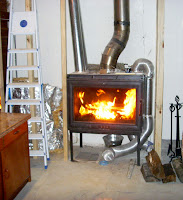 On a good note, the pine trees that we had to cut down earlier, are going to burn nicely and keep us warm for many, many weeks. Though pine burns quicker and a little dirtier (pine tars), I was pleased that the stove turned in a very good performance after laying dormant for so many months. With our new, double glass windows and doors, the house should stay warmer far easier and far longer than last year.

The cabinet maker came over to make final measurements for the kitchen and next week the first kitchen cabinet will be installed, the ceiling will be finished and we will start finishing the walls for tile and paint. This next week should be a good week. Today, Sunday, we have quiet day to ourselves, doing laundry and just enjoying the solitude. Tomorrow, everyone shows up for work and we are back in the middle of it.
Posted by Wally at 11:34 AM 3 comments:

A Tale of Two Lamps 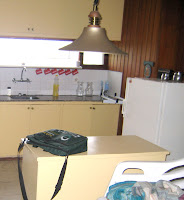 Once upon a time, in a quiet kingdom, there was a nice little house for sale, overlooking the beach. A couple from a faraway country came to find this house and moved to this enchanting land.

They looked high and low and finally found a magical shop, full of marvelous items in the main city of the realm. It was called La Ibérica and there was found the most perfect hanging lamp that would fit perfectly in that nice little kitchen.

Finally the kitchen was starting to get ready, and the husband went into the capital to find the shop. Lo and behold- the lamp was still there and still for sale. And so he bought it and brought it home to his wife, who was overjoyed to finally get the little lamp of their dreams for their new kitchen under construction. But when the new lamp was set on the floor next to the old lamp that had been taken out- guess what! It looked much the same. In fact, except for the color and a few odd differences- they were the same lamp. And what do we learn from this? I'll be darned if I can tell you- it's as much a mystery to me as it is to you.

Anyway, we are underway in the kitchen. The ceiling is sheetrocked and finally the ugly pipes carrying hot air to the back rooms are covered.

We are fast approaching finishes on many of our projects.  It is just starting to get cold. Haven't had to fire up the stove, yet- but that day is not far away.
Posted by Wally at 2:03 PM No comments: