There have been some complaints that my blog is getting bogged down. Yes- I confess, nothing much is happening. We have begun to enjoy our life here, finally. I think when the novelty of realizing that we have actually succeeded in moving to South America, and living in a foreign country finally sinks in, we will be ready to start off on new adventures. But I will share this little story from this last week.

I finally had my first accident in Uruguay. It was on the motorcycle, riding parallel to the Ruta (main hiway East and West in Uruguay). I had just visited a drug store, whose owner kept cars for sale outside his business and sold them for people. He agreed to take the bikes on consignment.

I decided to visit the house of some fairly new arrivals from Mexico (their last expat residence) and when I turned onto the road, I was faced with a school bus. I turned the bike and braked (a bad move any time) and laid it down, right on my leg. Now that sounds pretty exciting, doesn't it?

Well, here is what really happened. I was driving a motorcycle, but not the cool Keeway. I was driving my wife's scooter, to charge up the battery. Yes I was driving on a frontage road to the hiway, but the hiway has very few cars on it most of the days and there were no cars on the frontage road, at all. Yes, a school bus was coming, but in Uruguay, they transport school kids in 8 seat suburban type vehicles (long station wagons). And, oh, did I forget to mention that I was going about 4 mph? Yeah. I think my ego took a worse bruise than my leg (especially when the guy from the hot dog stand came over to pull the bike off the old guy), though it did keep me in bed for a couple of days.

Not much has been happening. We are back to having all of our furniture inside rather than stored around the yard and extra bedrooms. Now we are just waiting on upper cabinets to be built and installed (waiting and waiting and waiting- you get the picture). I really don't know how Uruguay businessmen ever make any money they way they start work and never finish. But at least we have everything necessary to a function. And the little VW bug is working great. Now if I can just sell the bikes....

Now it is time to get our little Fusca (bug) out on the road and see some of the country. That will be fun.
Posted by Wally at 6:04 PM 1 comment:

Day At the Beach 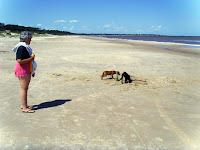 Well, we took advantage of nice weather today and took the dogs to the beach. It has been almost 8 days of intermittent rain (starting with the big downpour Friday before last) and while yesterday was very nice, I spent most of the day on my hands and knees fighting the fine fight against dandelions. I think I have won the battle in the front yard. But that was yesterday. Today would be different.

The weekend crowd had left today (all 6 of them) and we had the beach almost all to ourselves. Barney had been to the beach only once, and on the leash all the time. Shila had never been. We walked them down to the beach and let them fly. They loved it. Barney took to the water (with his short hair), but Shila got in a little too- just at the foam break.

They ran, they sniffed, they picked up things that couldn't be identified, but must have been intriguing, all the same. All in all, it was a successful outing. They were even willing to drop things which we thought they should stay away from (though we had to resort to shouting, at times). Shila finally got tired of it, and we trooped them home. They didn't mind being put back on their leashes when we got near the stairs of the beach entrance and we were happy to bring them home, safe and sound and probably quite tired.

Last week the carpenter told us the last of the cabinets (the uppers) would be finished and installed on Friday or Saturday. Well, you know how that went. But for now, having the floor finished and our furniture back in place and the kitchen sink installed (wow! I can finally wash dishes in the kitchen and not in Denise's bathroom) has put us in a much better frame of mind. I have spent the last few days using my weed wacker to clean up the back and front yards. We are not intending on having anything that would allow us to play lawn croquet, just a clean back yard that the dogs can enjoy. I have projects that will keep me busy during the next few weeks, and then we should be in top shape.

So, while the northern hemisphere settles into it's winter position- we are getting out fans and swim trunks and planning on our summer vacation. Where will we go? How about a lovely beach in South America? I think there is one nearby.
Posted by Wally at 10:49 AM 6 comments:

Week to Go Down in History 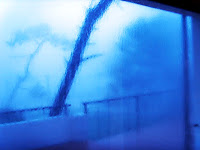 Well, despite rumors to the contrary, we are still very much alive. But this past week was a milestone in recent history. Three different workers (count them, three) turned up to work on completing some of the projects that had been started months ago. Perhaps the recent election brought out the volunteer spirit??

Anyway, Friday brought us one of the most dramatic thunder and lightning storms and dropped hail the size pecans and dumped more water in an hour than we have had in the last month. The picture at the top is sheets of water on the front window. I had opened the shutters in the morning, not expecting such a heavy rain, and had to go out in the downpour to close them. I was soaked through in a minute. Earlier, before the heavy rain, I had been out in the yard "watering" the dogs and heard strange popping sounds. I couldn't figure out what it was until I got hit on the back of the hand with a large hailstone. It hurt! I quickly got us all inside. Shortly thereafter, the water came down. The picture to the right is the front door mat with some of the hailstones. 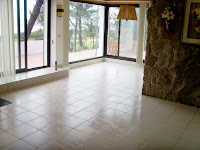 Eventually it subsided and Jorge, who had never stopped working, completed the last of the tile work for our living, dining and office tile, including the fireplace. The next day he returned and started the kitchen and we were able to move our furniture back. Saturday night, we sang our first karaoke songs in weeks and enjoyed sitting in our "new" living room. Hell Week(s) is officially over. 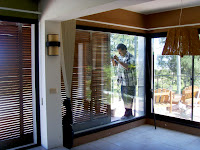 Earlier in the week, as I mentioned, several other workers came out of the woodwork (no pun intended, since one of those workers is a cabinet maker). Firstly, the herrero (iron worker) came back to finish putting in the security locks on the shutters covering the front windows and doors. A sturdy post at the end and 2 locks in each postigo (shutter) gives us a little more security. 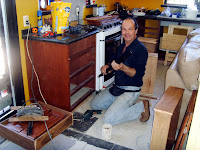 Then, Pedro, our cabinet maker, came with the doors and drawers for the lower cabinets, which had been installed way back in June (about 5 months ago). Each month as we checked on his progress he assured us he would be over next week. Well, he did come next week, just a little more "next" than we anticipated. In his defense, he lost his helper and had been sick. Denise has designed the kitchen cabinets with many, many drawers (as most kitchens lack these). The cabinet maker could not figure out why we needed so many drawers. But all the doors and drawers are raised panel construction and the drawers were installed with custom ball bearing glides. He has told us to expect the upper cabinets this coming Tuesday. Hmmmm I am sure it will be a Tuesday.... but will it be next Tuesday. We shall see. 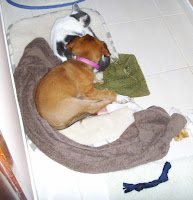 The puppies and Nathan, the cat, have been taking their incarceration well. They have been confined to the hallway for weeks now, but spending most of the time outside, as the weather has been very nice (past Friday, excepted). Today, Sunday, Jorge and his helper are here to finish the last of the kitchen tile. There will still be a few more days of work (finish grouting, cleaning), but we are fast approaching the day when all of our inside projects will be finished and we can get on the the business of living.

Since buying this house at the end of July, 2008, we have been trying make the house own own. Perhaps now, I will have time to get bored.
Posted by Wally at 3:27 AM No comments: