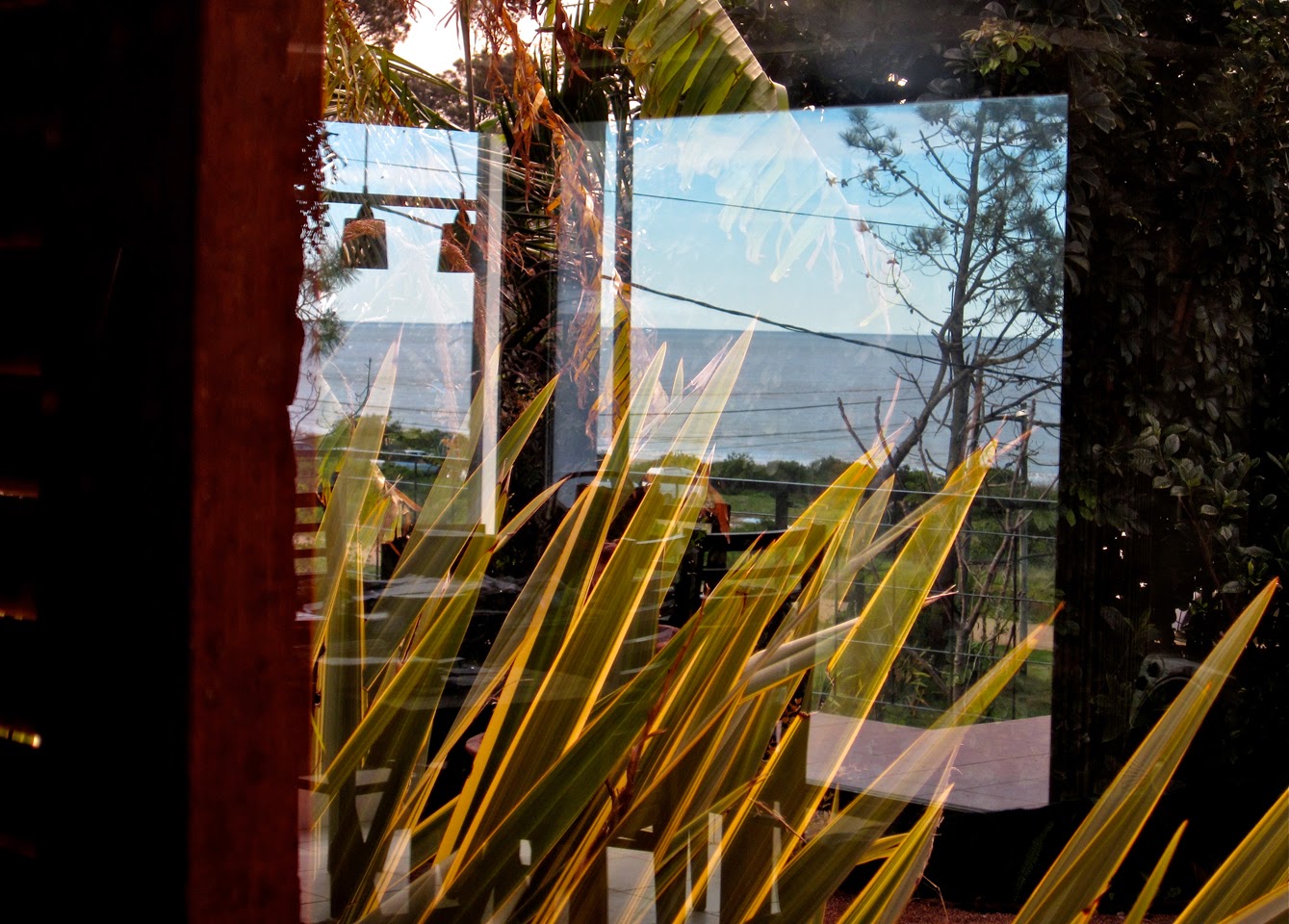 Okay, Solymar and I seem to be having the same problems, that of good drainage and the ability to flush our waste away. "The city of the coast" ( La cuidad de la costa) is solving their problems with a multi-million dollar project. I was able to solve mine much more reasonably.

I noticed the problem while taking a shower. The drain seemed to be slow in draining, so I made a mental note to get out the plunger once I finished showering and to try and jog things loose with it. I take very long and steamy hot showers. When I finally got out of the shower, I saw that my entire bathroom floor was flooded with water. It had come up from a drain trap door in the floor that most bathrooms have if the house has a pozo negro (cesspool/ septic system).

At least the water was fairly clean and a toilet hadn't overflowed. It's just that I thought, the shower was draining but it was actually filling up the drain box which was blocked, so the water having nowhere else to go started to fill up the bathroom. 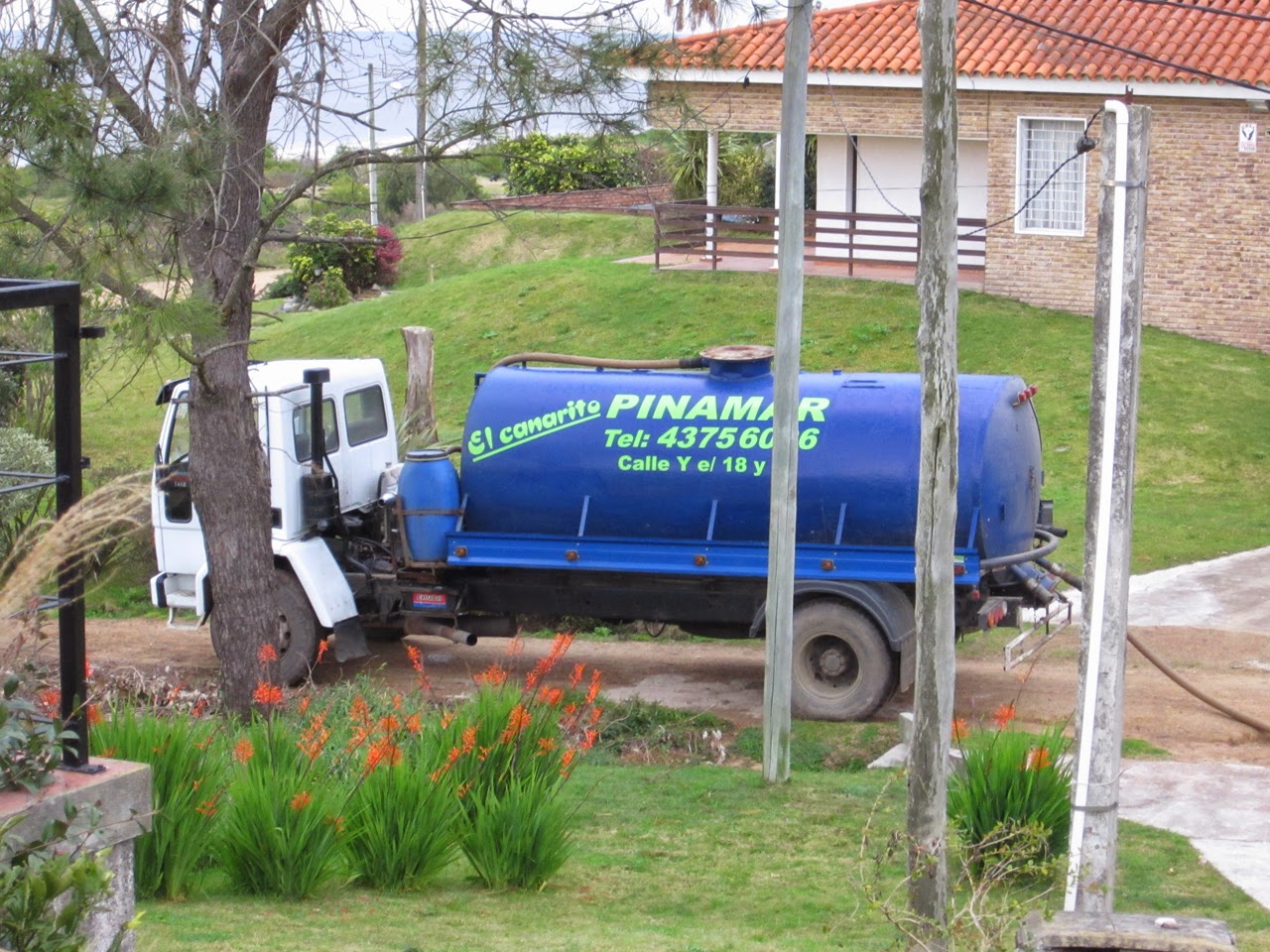 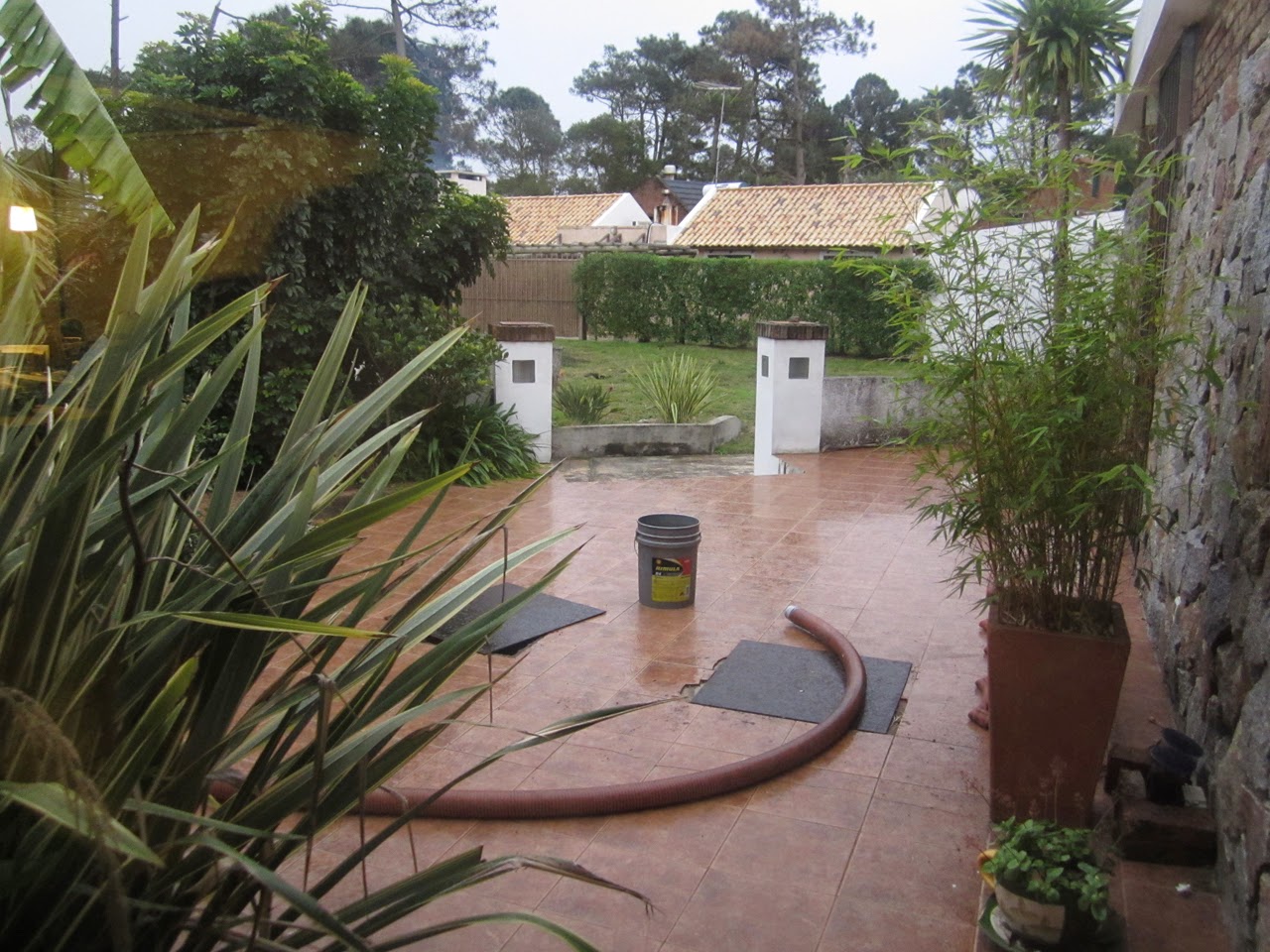 Juan told me who to ask for and to tell him that I lived on the same street that they had just been to. That made it easy for me to try and explain how to get to my house over the phone in Spanish. 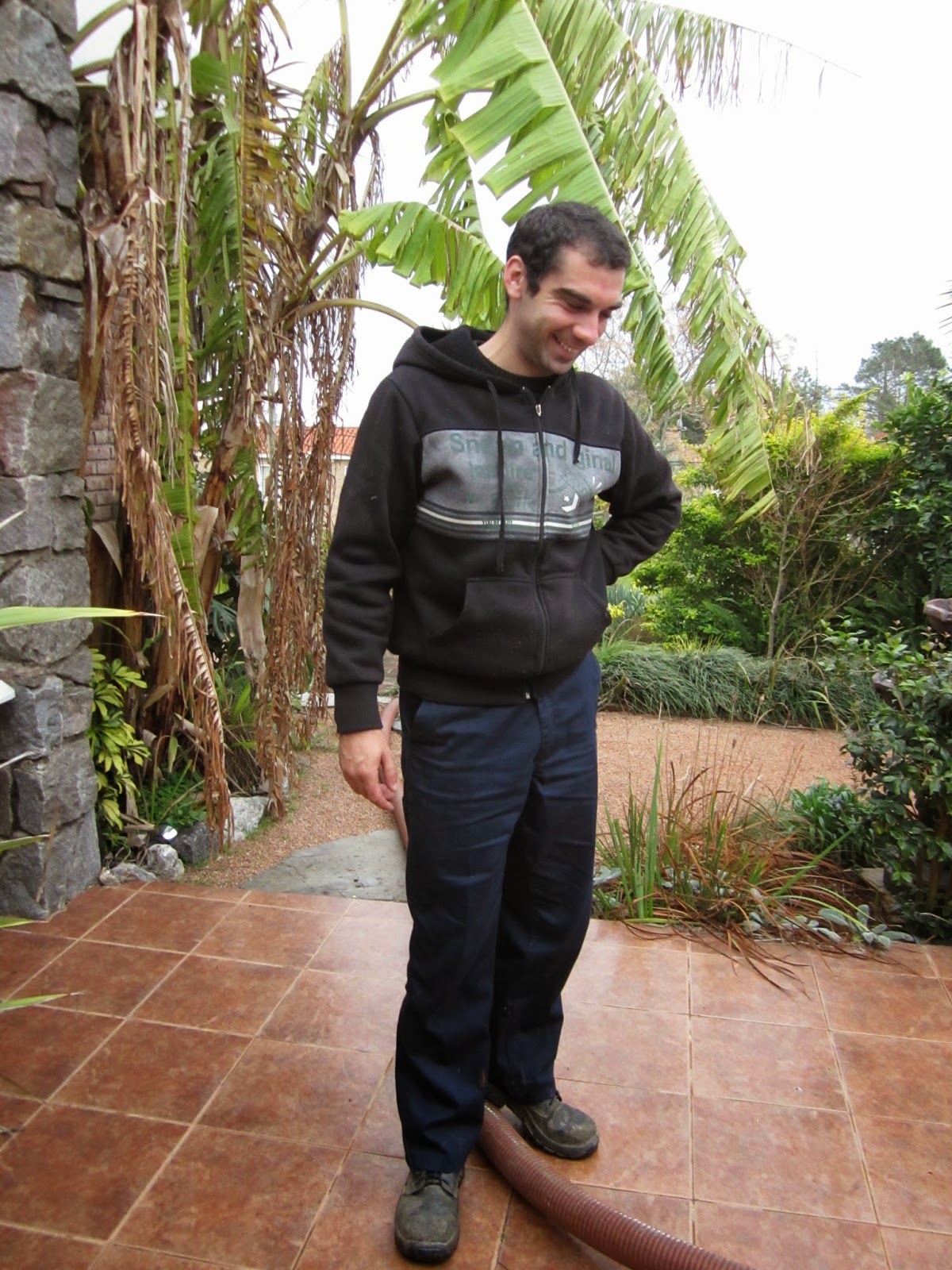 Juan said, that a fairly young guy named Mateo drove the truck. I had to wait a few days until they could come, so I started a no flush champaign because I didn't want my next flood to be, you know what.

The truck arrived on a rather gloomy day so I was glad to see them show up.

Soon, giant hoses were unloaded and attached to the truck that was parked in the middle of our street. The hose had to come up our drive way and then up my brick garden stairs. Then it was laid across my courtyard into the first of 2 iron tops that cover 2 access pits. One pit fills up then flows to a second.

I am completely upset with myself that I didn't show the pits after, they were throughly cleaned out.

I made sure that after they were finished, I verified it was in fact completely empty. We once had someone only empty half because they said their truck was full. They asked for a large price I think $1200 pesos  some 4 years ago but then they never came back to clean out the other half. Wally had paid them already. I now handle, the paying of people because I'm not so easily parted with my money. I explained to this company, that I wanted everything, cleaned out before I paid.

I was glad that I had made such a pre-fuss because sure enough it started to pour down rain and they said, they had to empty the truck. They said, they would be back after lunch but not too worry, I wouldn't pay them until they had come back that afternoon and finished the job! Whew,

They came back in the pouring rain and finished the job. I think because of all the rain and fuss that after I looked into both pits I forgot to take the photo of how deep and awesome our empty pit was.
Instead, I asked, if I could finally flush my toilets? They said yes, so I gave the needed flush however when I came back out they had already lifted back on the heavy iron tops and I didn't have the heart to ask them in the pouring rain to take them off again, so that I could take the final photo. Too bad, Qué lástima (what a pity).

After my Pozo was totally cleaned out I was so happy. I took a long shower. The next day, after a very long shower, I came out into the bathroom to find it flooded again with shower water!!! This time I called a plumber! 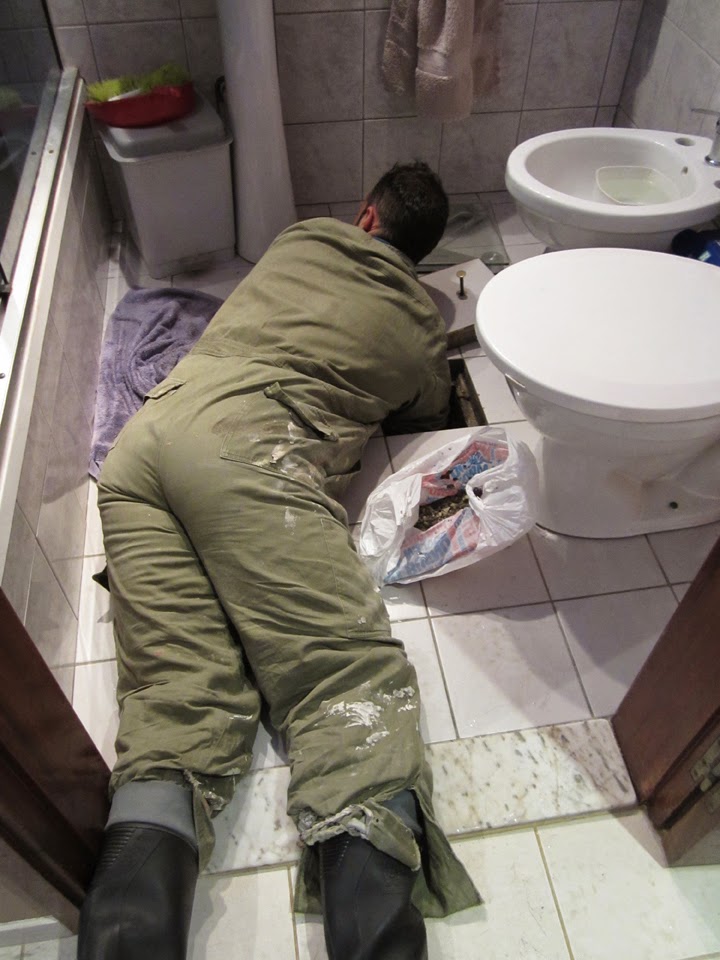 Diego, the plumber, speaks English but he says he is going to move to Spain soon. So too bad, the expat community will soon lose a valuable resource.

Wally's bathroom backs up to mine. We each have a little floor drain. That was good to remember, because after taking out a lot of grit, sand and debris from the bathroom drain that had flooded, we wondered why the drain was still slow to drain. Then Diego opened up my drain. It too had grit down it. Still, the shower drain was slow to drain. It only worked, after Diego used a home made snake (a piece of rubber hose) to clean out the connection between Wally's bathroom drain and mine.

The last photo above shows how much sand, and etc... that he cleaned out of our drains. Now, I can take truly long luxurious showers and step out onto a dry bathroom floor. Yeah! Diego din't charge too much. So unlike the neighborhood of Solymar, my 2 projects of sewage and drainage are now complete.

So as not to leave you with images of poop and debris, ugh, I will use this post as a perfect excuse to include some recent photos of my new kitten Romeo and my cat Nathan, to focus on instead. They are getting along great. Nathan is proving to be an attentive big brother.
Posted by Denise at 4:30 PM 4 comments: