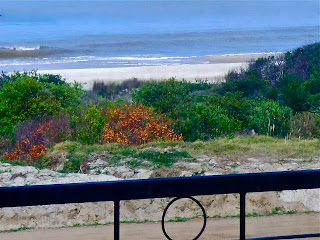 Okay, we live near the beach and that's great except when you realize how corrosive salt water spray can be on iron. Wally and I hate to paint and now we are reaping the sad results of that tendency.

The good news is that I am slowing starting to address the rust problem areas and fixing them. Unfortunately, because we waited so long in doing this we had to again, get professional help in tackling the problem. I called the garden gate father and son team to return and have them give me an estimate. I would need grinding down and taking off the rust spots and patching and filling them up. Since these guys are iron workers I knew that they could weld anything that might need it.

Remember, that I originally got their telephone number from a sign off of the main highway.
They were quite professional despite their sign. I was pleased to have them back!

They scolded me, (nicely) for having let the railing get so bad. I agreed! We had almost lost, a good investment. I freely admitted, that in 5 years we had only painted the railing once and not even completely. So with head held down in shame, I hoped that they could repair the damage. It was bad!

After, accessing the damage, Sergio the son came back to my house with a written estimate of what the work would entail and cost me. He even put it in a plastic keeper which I felt bad and gave back because I wasn't sure when I would be able to start the work, I should have kept the holder.

In brief, he would remove the rust from the bars and repair the holes/perforations and paint with 2 coats of anti-oxide paint and another 2 coats of shinny finish paint in black. He said that the esmalte brand name of the finishing paint was a brand from Germany and was especially good at resisting salt water.
It was expensive but the damage was extensive so I agreed to the price.

The head of the team, Sergio (the son) arrived on his motorcycle and his helpers arrived on their bicycles.

He showed me the wire brushes that he had bought especially for my job.

He asked if he could store his extension ladder in my storage room during the job. It had to come by truck since it was too big to carry on a motorcycle so of course, I said yes. It was a sturdy giant wooden ladder. I didn't know they made extension wood ladders that tall. Of course Nathan, My cat had to check out the giant scratching post. Sorry Nat, it's not for you!

The first day a very young looking worker about 18, came. He used the grinder and ground down a section (that wasn't all that bad) for 5 1/2 hours. It looked nice but the second day reinforcements came to help.

I choose black as the finish coat because the railing was black but the coat of grey primer anti-oxide paint was kinda of pretty.

I was home during the repairs so I know that 2 coats of grey primer were used.

Next came the shinny black coat of finish paint. I was shown the can and yes it was made in Germany.

The black coat was much more of a pain to use being a sticky oil based one. So even more help arrived 2 days later after the grey had dried. 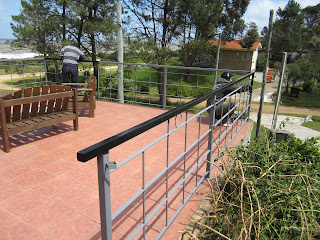 I had Jasmine growing on this side of the railing which helped my plants from getting wind wiped. It also smells so lovely at night when I open the nearby window. It had to be removed but I was able to flip it back over after the paint dried. It smells heavenly now.

The sad news is that while the repair work was great and the 2 grey coats of paint were great and the 1 black coat was great, the final coat was not. Naturally, that's the one everyone will see and I am stuck looking at. The first black coat had time to dry but the second coat was shaken not stirred. While that maybe the preferred James Bond method for Martinis, it left bubbles in the paint. One smart ass worker tried to tell me it was the result of sand blown onto the coat. I looked at him and said I don't speak Spanish but that doesn't mean I'm an idiot. I know that that is not from sand but bubbles, another worker agreed with me, this was not from hard grit. When the boss came I showed him the sad result and they got to work painting and I guess "smooching" the paint down with the rollers. They did the best they could. It is just a shame that the other coats were perfect and this 4th coat was not. At least from a distance the railing looks good and with 4 coats of paint on it I know it's well protected. 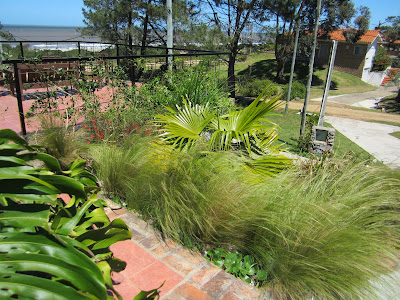 This time I will try and keep it up, by painting it yearly. I've learned that in Uruguay things aren't always going to go perfectly but since neither do I, I guess we're a good fit.
Posted by Denise at 5:10 PM No comments: