Uruguay, is starting to feel like home now. Still there are "a few things that we miss" and now realize that we took for granted when we were living up north. Because we moved to another continent, everything from our old life had to be shipped in at great cost when we first arrived. Any expendable item, has now been used up, after 5 years of living here (June 8th). That's why when any visitors say,  they are coming down to check out Uruguay as a possible place to live, usually they get asked to bring down, "a little tidbit" from our old life, like say, Garlic pills in gel capsule form.

I have had to use up almost my entire supply of them, for my poor dog Barneys' ear infection. Pricking the soft gel open, then putting the tiny amount of garlic oil in his ear was the ONLY thing that stopped the infection. I made some garlic oil using olive oil and garlic but it wasn't the same strength and it didn't work as well. I tried the vets medicine, as well as some "Tea Tree Oil" (Melaleuca alternifolia) Pharmaceutical Grade brought in by an expat returning from a trip and shared as a gift, but only the gel form of the garlic capsule did the trick, whew! No more ear infection!

I miss buying giant bulk items from Costco. That is no longer a part of my life, as there is no Costco down here. No longer, do I have the mental security of having 24 rolls of toilet paper waiting for me in my garage. There are no Lowe's (formerly Eagle) stores here or Home Depot stores for building and garden supplies easily bought in a one stop local. No Joannes' or Michael's craft stores (I think that latter chain went out of business years ago) are to be found here. No Target, nor Pier One or Cost Plus stores for me to pop into for cool stuff either. Alas, while I still tend to mourn the loss of easily buying what I need, at a moments notice and at a great, even cheap price (things are expensive here), I have learned to gear down, really I have. Most expats, after years of living here, usually just really miss a few simple taste treats from up north, like good chocolates (chocolate chips for cookies), speciality spices and surprisingly peanut butter.

You can buy peanut butter down here, but it's expensive. It comes in tiny little glass jars (as shown in the title photo). For 200 grams worth (about 1 and 1/4 cup) you will pay $120 pesos or $6 dollars US or even slightly more with these current low exchange rates. For several years, you could only find these little jars of all natural peanut butter, the only kind they make here, at speciality places, like craft and food fairs that sold them along with garlic butter and other speciality butters.

The company that makes this, has now figured out, that there might be a wider market for the stuff than just those people who come to county fairs. Now, they are advertising about this "speciality item", on little flyers. Wow, imagine, all I had to do before to buy some peanut butter (as advertised on this flyer) was to go down to the Capital of Uruguay,  to Montevideo but only on a "Thursday or Friday" then go to the Plaza Cagancha where a semi-permanent tent is set up and they could sell me some. That's why it's so great that they are now also selling their product in 3 supermarket chains; Devoto, Disco (yes that's a grocery store name) and Géant, our equivalent down here to a Walmart. Maybe, it can also be ordered online too?

Nowadays, the big supermarket that tends to carter to foreigners, Tienda Inglesa, also sells those little jars along with some German and Swiss imported PB. I once lived in Germany and did not like the peanut butter there at all. It was tasteless and a little waxy(?), like they didn't really understand the concept of a "creamy" spread but aimed for a hard paste. To all German people, "sorry", but that was me, my friends and Wally's take on the taste of German peanut butter. We did however, love the bread and beer in Germany much better than the USA, so, I guess it was a trade off.

The expensive prices down here, as well as the inability to easily get items, has forced many expats to go to great lengths to stock up and attain their favorite food stuffs. One expat went to an Argentine source and bought 5 gallons of the stuff (peanut butter) and was selling off scoopfuls for around 40 pesos each ($2.15). Still, I think he'll have his 5 gallon bucket around for a long time. We did buy 80 pesos worth from him when he first got his bucket.

We finally decided, to just go ahead and try to make some peanut butter ourselves. As a side note, orange juice has been the same problem down here. Only a few stores that cater to foreigners sell it, usually only in machines and freshly juiced on the spot in the aisle of the store.  The juice is expensive, but oranges are not. Most expats buy oranges, take them home and juice their own orange juice. This place has a way of "forcing you" to be creative and "Homey".

Homemade peanut butter is easy to make!
5 minute recipe
Use a food processor or powerful blender

Add just enough oil to make it smooth. (using Peanut oil would make the most sense, don't use olive oil, it has too strong a flavor).

You must stop the machine from time to time and scrape down the sides. Once it turns creamy, your done. You don't want to overheat your machine.

We didn't bother roasting our own peanuts this time. We used already shelled and roasted unsalted peanuts because we didn't want to mess with those little red thin skins. Some people roll them in their hands to separate the skins from the nut and let the wind blow the skins away. Some people roll them by hand and then, let them drop down into a salad spinner and use the spinner to separate them. 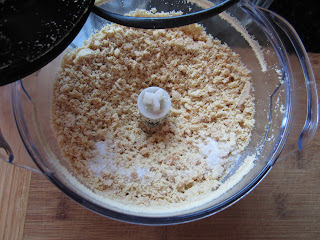 If you are using a food processor you can drizzle the oil in while the machine is running. We put in the peanuts, salt and sugar then turned on the machine, then we stopped it and added the oil 1 tablespoon at a time. 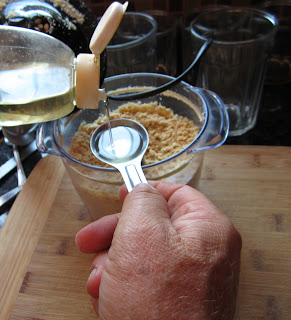 Note that, we found out our little mixer wand container wasn't powerful enough to do more than crush the peanuts, so Wally dumped the whole batch into our blender. (Live and Learn). 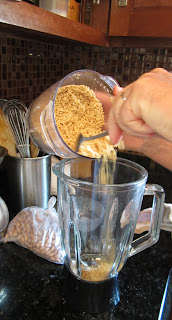 After running the blender for a few seconds, we turned it off and scraped down the sides, then added our first Tablespoon of oil. Turning the blender on again and off this way but not  "pulsing it" just running it a little, turning it off and scraping it down, then back on again, adding oil as we thought necessary 1 tablespoon at a time during this process, it started to turn creamy. A recipe blog site said that Spanish peanuts have more natural oil in them but I guess ours were not from Spain but Uruguay, so we had to add up to 3 tablespoons of oil, (1 at a time) to get a good consistency. 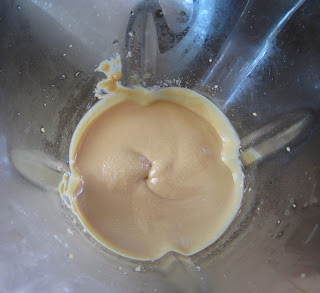 The whole thing was ridiculously quick (less than 5 minutes) and easy to make. We know it's fresh and exactly what the ingredients are in it. In the time that I took to write this post several batches could have been made. 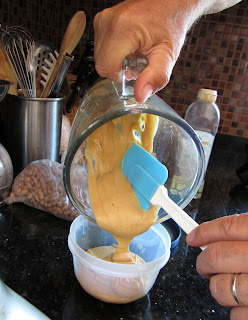 We got about 1 and 1/2 little jars worth (almost 2 cups). We had saved some now empty store bought jars and poured our brew into them. The pre-roasted peanuts cost us about $39 pesos for this batch, they were bought at our weekly feria/farmers market. A jar and a half from the store would have cost us $180 pesos ($9.50 plus). So for only $39 pesos (around $2) and some spoonfuls of additional cupboard items, it was well worth the effort (vale la pena). We stored it in the refrigerator and it stayed creamy. 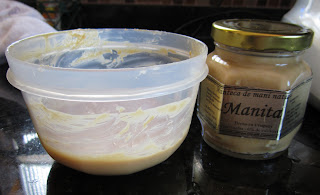 What's more, we don't have to meet some guy, on some shady street corner saying, "Hey, do you want to buy my stash, I can hook you up with some of the good stuff." (we're still talking peanut butter here).
Instead of hunting high and low for a taste from home, we can now make our own, anytime we want.