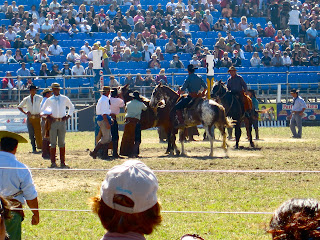 I mentioned in my last post that Wally and I took advantage of a dual event, a train ride that also included entrance to a rodeo being held at the El Prado fair grounds. This was during the festival celebrating, Semana Criolla (the week of the Criolla). This festival is in it's 87th year. Because I was busy going to Spanish school I just realized that I never got around to posting about the rodeo. So better late than never! There were actually 2 rodeos held in different locations and in different weeks. I attended the first week's rodeo held in Montevideo, the Capital of Uruguay.

Those tickets were free with the train ride. Maybe next year, I'll go to the bigger one held some weeks later in the town of Minas some distance away.

The cowboy is still very much alive here in Uruguay, only we call him a Gaucho! This term Gaucho, is also used in Argentina and in Southern Brazil (the Rio Grande do Sul area). In Northern Brazil they are called Vaqueiro (the same term as used in Spain and Mexico). Criolla is a term also associated with the Gaucho here in Uruguay. Although in modern usage the word Criolla (Criollo,Criollos, Criollas) that is found in various Latin American Countries(Argentina, Chili, Southern Brazil/Rio Grande do Sul and Uruguay) usually means
It can refer to anything from that national American-born person, to a style of music (Cuban), a couple of band names, Tobacco leaves originating from Cuba and used in wrapping cigars, a type of food (Mexican cheese, a hot condiment/Puerto Rico and Peru, a cuisine dish of food/Venezuela) or a breed of livestock (horses, sheep). 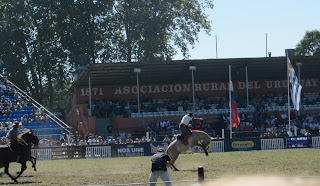 Here in Uruguay, Criolla has come to represent another meaning, that of, the country or  from the countryside. The term Criolla or from the countryside is tied into the idea of the Gaucho's whole way of life. Gauchos, as the wikipedia states, "gauchos made up the majority of the rural population, herding cattle on the vast estancias, and practising hunting as their main economic activities. 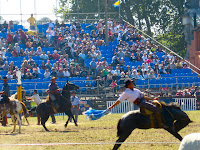 Rodeos also typify Gauchos. Just like the cowboys of North America, these South American gauchos use horses extensively in herding cattle. Here in South American, cattle still roam on open plains, the majority of them being grass fed and not consigned to feed lots.  In Argentina, the Gauchos drove cattle in the Pampas, the great central plain (grassland) in the Patagonia area, that borders the Andes, Uruguay and Brazil. Argentina has always been noted for their great tasting grass fed beef. Here in Uruguay we too are noted for our great tasting beef. This is a land of beef eaters (and meat in general). It is very hard to be a vegetarian here! Uruguay has even started to import beef over to Argentina!

Okay, I have to breakdown, one more time and quote the Wikipedia, as to the gaucho and his horse. 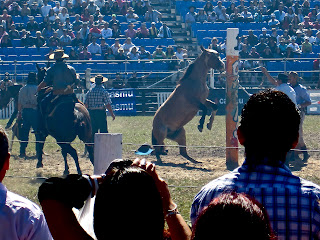 "gauchos were and remain proud and great horseriders. Typically, a gaucho's horse constituted most of what he owned in the world. During the wars of the 19th century in the Southern Cone, the cavalries on all sides were composed almost entirely of gauchos.
The gaucho diet was composed almost entirely of beef while on the range, supplemented by yerba mate, an herbal tea-like drink rich in caffeine and nutrients. Argentine cooking draws influence from the simple but delicious recipes used in gaucho meals." 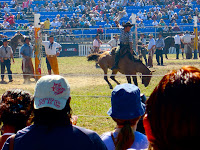 That statement from the Wikipedia about gauchos being and remaining proud and great horse riders is clearly shown in my opening photo! Most of the photos that I took of them during the rodeo seemed to show them proudly posing! They still dress in their distinctive style of clothing. They take pride in the tools of their trade, whether it's in the horses themselves (nicely well fed) or in the various articles they use like saddles, ropes, and knives, etc...

You can see the craftsmanship in the saddle photo. Saddles here are not in the "Western style"as in North America (the saddle horn is also missing)  The rider will usually put a sheep skin over the horse's back then add this saddle.

There is a Gaucho museum in Montevideo that I will be posting about in a future blog post.

The Train Ride and Peñarol!

Wally and I took advantage of tourist week (also known as Semana Santa) here in Uruguay. Always looking for a bargain we just couldn't pass up a combination Rodeo and Train ride event. The purchase of a train ticket to a town nearby Montevideo called Peñarol included a free entry into the Prado where the rodeo was being held that week. The cost for the round trip ticket was only $130 pesos per person or about $10 US each. What was so special about the train ride was that it was aboard a restored 1910 steam engine train. This engine is considered a real heritage item for Uruguay.  Heritage in Spanish is also called, El Patrimonial (which can mean wealth or Heritage) So this train is being promoted as "Tren Patrimonial". It has no true name but is an N type locomotive and it's number 120.

The "Uruguayan Railfan Association" or "Amigos del Riel", have restored 2 historic rail cars as well and the steam locomotive that pulled these 2 cars full of us appreciative passengers to Peñarol for this event. 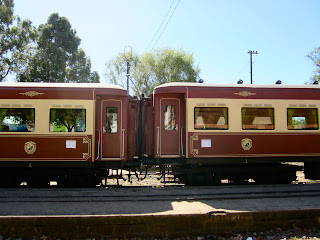 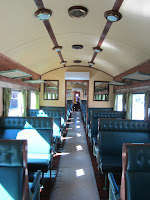 Peñarol is named after a city in Italy, in the region of Piamonte called Pinerolo. In 1751, a person named, Juan Bautista Crosa leaving the land of his birth immigrated to Uruguay and he was nicknamed (apodo) after his birth place in Italy. In his dialect of Piamontés,  Pinerolo sounded like Peñarol to Uruguayo ears and the name Peñarol stuck.

In 1776 Crosa a.k.a. Peñarol started a store (pulpería) some 10 Kilometers North of Montevideo where everything was just campo (fields) and established an Inn. These provided everything needed for daily life: food, drink, candles, medicine, and cloth. Together with the local church these constituted the principal places of the community. He died in 1790 and is buried in the churchyard that adjoined his store. 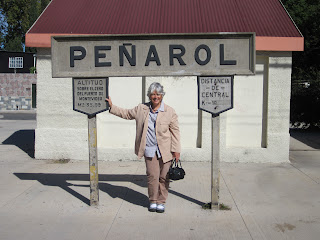 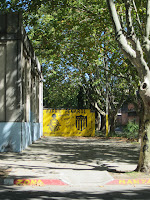 A century later in 1890 the English Railway or empresa de ferrocarriles inglesa bought 17 hectares of land and in 1891 inaugurated the train station and workshop for the trains. Peñarol became a"factory town", with general housing for the workers and also in the town places to live for the high ranking officials working for the railway. The town boasted a social scene with a theater (which plans on being renovated one day), areas for playing soccer (fútbol in Spanish) cricket, polo and tennis. As the area kept on growing in urbanization, Peñarol ended up integrating as a district with Montevideo.

Wally and I were impressed with the guided tour and information given. We were given a brochure and a card map showing the various landmarks of interest in the town. We were also given a little gift, some little pieces of coal as a reminder that the steam train needed coal to run it's engines. At the end of the tour we were given some original ticket stubs from those early years as a souvenir. 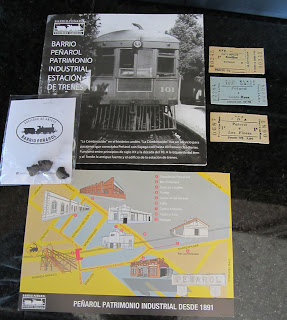 The Wikipedia says, that in "1803 - The first public railway, was the Surrey Iron Railway in London." It was really just a horse drawn plateway. The brochure we were given stated that the first railway in the world was established in 1825 in England between Stockton and Darlington. According to the Wikipedia it was, "the first publicly subscribed, adhesion worked railway using steam locomotives, carrying freight from a Colliery to a river port. (Passengers were conveyed by horse-drawn carriages)." "In 1830 - The  Liverpool and Manchester Railway opens, and the first steam passenger service, primarily locomotive hauled, is started. The line proves the viability of rail transport, and large scale railway construction begins in Britain, and then spreads throughout the world. The Railway Age begins." 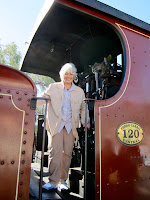 The first railway line in Uruguay came in the year 1869 between Bella Vista station (2 blocks north east of the current station) and Las Pierdas. It was started by a firm of private capitalists of cattle men/cowboys or Criollos.

The name became FerroCarril Central del Uruguay (FCCU) incorporated in 1866. Ferrocarril means railroad in Spanish. In 1878 some English Capitalists bought the railway but kept the original name except calling it by it's English translation, so it became known as the Central Uruguay Railway (CUR). The railway arrived in Peñarol in 1890. The English inaugurated the Peñarol station in 1891, and some of the first workshops came into existence between 1891 and 1907.

The 200 passengers on board were divided into groups once we arrived in town and each group took off in a different direction so that we wouldn't be crowded. 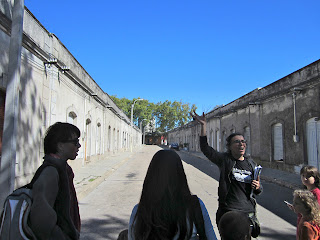 Our tour guide was named Victoria. The tour was conducted in Spanish of course but she did come up to me personally and asked if we could understand her and if she was speaking loudly and clear enough to be heard, that was nice of her!  she spoke clearly and we understood her surprisingly well.

The tour guide had a loud yard whistle blow, it was deafening but exciting for the kids and us to hear and then we entered the main workshop (built in 1907). One of the high-points for Wally during our trip was seeing the workshop for maintaining the trains in Peñarol. If you look at his face it's like a kid in a candy-shop, you know guys and their tools! 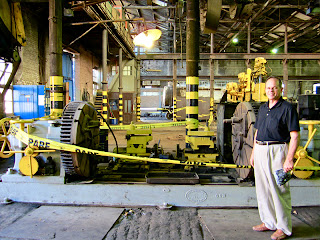 As I mentioned before, the maintenance facility for the trains impressed Wally, due to the size of such tools needed to work on the trains, like the metal lathes, drill presses, drills and saws. All of these were powered by huge electrical motors at one end of the building, though originally they were steam powered fueled by coal. These drove long shafts at ceiling height that ran the length of the building. Pulleys and long and thick belts were attached to these shafts, which powered  each piece of equipment in the work area.

Various landmarks and buildings in town were marked before them by metal letters embedded in the side walk. 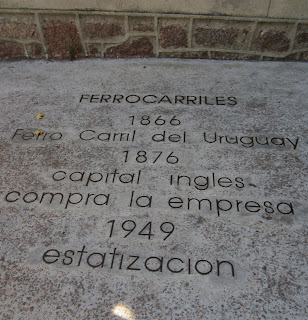 After leaving the train yard we saw where the workers had been housed. People still live in these dwellings today, I guess they didn't mind 2 tours a day of people trooping by their places for this special week of activity in their town. We also walked back to the train station and entered into a small museum. This museum featured some old time equipment used back in the early days of train travel, like a switchboard and morse code machine used to contact the stations in order to handle their traffic flow.

Wally mentioned how nice it was relaxing on the bench outside of the train station and how enjoyable it was watching the many children with their families' hand in tow strolling by him. He thought it was great that these families, just like we did, took advantage of an event like this. We look forward to other event offerings in the future.

All in all, we thought that the short train ride and our day trip to the barrio of Peñarol was very worthwhile.
Posted by Denise at 11:30 AM 12 comments: