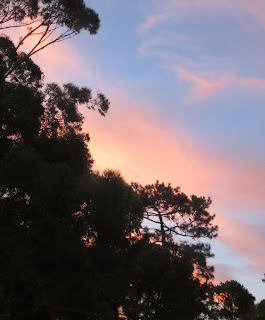 I must have a thing about roofs and different roof material types. In the past, I've posted about a thatched roof (Quincho) being repaired or rather replaced with a new thatched roof. I've mentioned my neighbor's tin roof being exchanged for a clay tile one. Now, it seems only fitting to mention my cement and brick covered one, atop my own house.

I don't personally like the idea of a flat roof. Although, I was raised in Southern California and "Seems, it never rains in Southern California, (unless) it pours, man it pours." (I'm alluding to an old 1972 song here). Despite raining a little or a lot, I do not like to think of rain settling on the roof and just staying there, pooling and eventually causing problems. Now if I had lots of money, I'd build a roof deck on top of my flat roof and take advantage of the view but alas I'm broke so no roof deck in my future.

One of the big differences between Wally and I is, he's not just a "glass half-full" type of guy, to my "glass half-empty" personality but rather, he is a "the glass is always full and overflowing" type of person. I think that's why I'm forced to be the half-empty type, just to balance or compensate for his exuberance.

So after our end of the year row/tiff, he finally agreed that maybe, my concern about seeing some ceiling cracks in my bathroom and in our bedroom were valid. In our bedroom we once had an old wood stove that the previous owners had left behind. We were concerned about using it and possibly getting badly burned walking around it in the middle of the night so we remove it years ago. That left a large hole clear through the roof where we took out the chimney. The hole was patched and you'd never know that once we could see the sky through it. However, several months ago I noticed a drop of water coming down in that repaired spot. Actually, I originally thought that one of our dogs was having bladder problems because her dog bed was under that spot. I was finding her bed slightly wet during the day and I thought she was leaking! Well I'm glad to say no, she was fine, just the roof was leaking. Wally kept putting off repairing it until finally, I was afraid we would have a skylight there because of it's falling down.

The spot went from a barely noticeable drop to being full of cracks. I wasn't really worried about that spot because I knew the history of the ex chimney. I finally complained about my bathroom enough to get attention to the whole problem. Our roof needed help!

We called around to our friends and asked, if there were any roofers among them. It turns out that a good friend of ours Leo (he drove Wally to the airport in a post last year) used to be a roofer but now had a sales job. Leo does maintenance at our congregation and is a meticulous worker.

He took a week off of work because sales were slow due to the holidays and he ended up repairing large sections of our roof during this time. We were so pleased with his work that I was able to talk Wally into using him again to do some other sections of our roof in a few months from now.

Our roof as mentioned, is made of concrete. The concrete is coated with liquid asphalt, a tar like substance. That is covered with a thick membrane roll of Asphalt, then a base of sand covers that and finally thin cement tiles called tejuelas used for walking on, cover the sand.

Our house is very old but that system had lasted through all these decades until now. The membrane had simply become buckled up at the edges. Some of those edges had become unsealed. Because of all those high winds and tropical storms starting in September, water was driven under in spots and allowed ingress.

Leo says, that many people make the mistake of not sealing the edges after the membrane is torched on. There is a product using liquid aluminum that can help keep the edges from coming loose due to the intense sun temperatures a roof receives. Covering over the blacken tar like stuff with the light liquid aluminum can reduce decay and prevent this problem.

After the black liquid is rolled or painted on you must then torch on a separate membrane roll over that coating. I have seen other roofers not really torching the membrane to melt it as well as they should but melting it is what thoroughly adheres it to your roof! 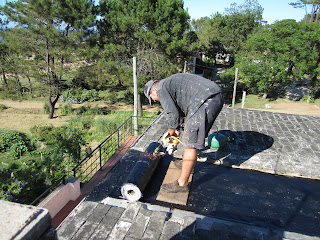 The back of this membrane asphalt roll is covered with an included aluminum attached cover. This is to reflect the sun and not absorb it. That keeps your roof cooler in summer then just asphalt alone would.