This week is the "Week of Tourism". It is also called "Santa Semana", or Holy Week. However, since Uruguay is one of the least religious countries in South America, it is recognized more as Tourism Week, one of the last big holidays at the end of summer. Many businesses are closed this week and little business gets conducted, as people take to the beaches and enjoy some of the activities that they will not see in the winter ahead. 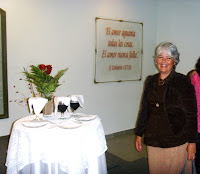 Last night we attended the Memorial Celebration that is held each year at local Kingdom Halls. It is interesting that we have enjoyed this particular event for over 38 years, in places as varied as California, New York, Hawaii, Washington State, Guam, Germany, Portugal and now Uruguay. In all these places, and in various languages- it remains virtually the same. Even though we are not "up to speed" with out Spanish language, a meeting such as this helps us to feel more at home. Sunday, we have been invited to an outing with the group, where we can rent horses. I am getting out my hat and cowboy boots. That should be fun.

Denise walked into town today. Town for us is becoming Salinas, more and more, since we are fast becoming adjusted to life in the slow lane. Atlantida, to the east, is getting to be the "big city". She went to mail a postcard to friends back in the US, at a cost of 17 pesos (just under a dollar). 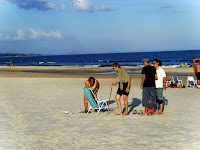 She walked to Salinas on the beach, rather than taking the rambla (the road that fronts the coast). Just a few feet difference, but a much more pleasant experience. She enjoyed seeing all of the people fishing, and playing at the beach. As we look east from the beach, you can see Atlantida at the far end of the beach, before the beach comes to a point that defines the little cove in which we find ourselves.

I have spoken to the herrero who took a deposit over a year ago to build some stairs to the roof and he assures me he will get to work on them after Santa Semana. I also talked to the cabinet maker who said he is getting the rest of the kitchen cabinets finished. Well, we shall see, won't we.

But for now, the mild temperatures and sunny weather is cheering us up and we can't imagine a nicer place to be. Well that is not entirely true. We can imagine nicer places to be- but we couldn't afford to live like we do in those places. So for now, we have found our perfect place to retire.
Posted by Wally at 3:39 PM 2 comments:

Today marks the final installment of the Great Tooth Escapade of 2009-2010, as it will come to be known. Finally, after an initial assessment on Dec 9th, 2009, Denise went for her appointment with Medico Uruguaya and in less than 30 minutes, the tooth was filled and we were on our way home. This culminated a process taking months, multiple visits for temporary fillings (which would fall in a week) and a visit to the main office in Montevideo. I can now say that Steve, our sage guide in La Floresta, was probably right. We could have gone to a local dentist, had the job done months ago and probably saved money in the long run. But we wanted to see what the dental program was for the medical plan. Not very good, as it turns out. Still, the rest of the medical plan is quite good, for many major procedures.

Also, we used the Telepeaje Pass (the electronic account for the toll booths) for the first time, and passed seamlessly through the booth, having only 9 pesos deducted from our account (normal cost is 45 pesos). The electronic readout showed the balance of the account each time, after the account was charged.

This week we had 2 new workers to help us with projects to get ready for Winter. One built another wood storage bin, for a second ton of wood and another reworked the bars on our kitchen window (which had been badly installed before) and also put a solid frame on our trash barrel, since the old, cheap, hinges had long ago failed. This is our 3rd herrero (iron worker) in less than 2 years.

The mosquitoes continue to plague us. I sprayed the back yard the other day, which gave us one day's respite, but they are back again, today, with a vengeance. So, we stay inside as much as possible. We are besieged in our own home.

Still, all-in-all, this past week has been quite good for us. A few more days hunkered in our house, and we will soon be past the insect outbreak. It is possibly worse in Montevideo, where trucks have taken to the streets pouring gaseous insecticide in the mornings. So, we have avoided that. And, we are getting some projects done, as well. 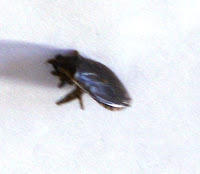 Well, last night, the insect offensive was in full force. After coming back from the meeting, we noticed a cockroach on the floor, near the office area. I killed it and didn't think too much of it. Then, while watching television, I noticed another one, near the kitchen. Now, we've had a few before, but 2 in one night was unusual. Then I looked out on the patio and it was like Night of the Dead, only with roaches.

To be honest, the cockroaches were not much by world standards. They fly, like those in Hawaii, but are very small. Didn't see any over 3/4" in length. They wouldn't even make a New Yorker look twice. Of course, they might have been adolescents (out for a joy ride). Anyway, we were besieged the whole evening. I went out and did battle (chemical warfare), but was driven back in. Then we closed everything up (but you know roaches can get through anything), sprayed the threshold and waiting to see if it got worse. We had stopped them, for now. 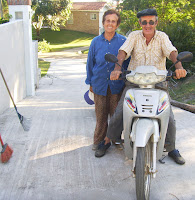 This morning, I looked around at the battlefield. Many brave cockroaches didn't make it back to the nest last night, and I finished off a dozen on the deck, as well. We'll see how tonight goes.

This is a picture of the couple Raul and Nivia) who do yardwork for us. They are not on a regular monthly service, but when things get too bad, we call them in. Probably come in about once a month. Place looks great for 2 weeks, shabby for a week and then positively neglected for a week, and it is time to call them. Now they have to be at least as old or older than I am, which is why I hate to call them. I should be doing it myself. But I am so lazy, and they come and clean up front or back for $30 and they do a great job. Haul everything away. I was never that good. But it is embarrassing to have someone your age doing work that you should do. So, on the days they work, I try to stay out of their way and let Denise handle that side of the business.

We have a painter and a new herrero (iron worker). This is the 3rd herrero we've used. I have high hopes for him. He has worked on the house, in years past and the painter has worked for our neighbor for years. Finding good help is hard, even for locals (so they tell us). This coming week we have an appointment for Denise's tooth (the little cavity that showed up on Dec 9th of last year). We'll see how that goes. Denise also received her US driver's license (renewed) and we'll be able to go into Montevideo and get a Uruguayan license soon. We are trying to gear up for Winter. Fall is in full swing.
Posted by Wally at 4:17 AM 1 comment:

We learned an interesting phrase the other day meaning "to swindle" or "pull the wool over ones eyes". In Spanish it is "dar gato por liebre" (literally to give a cat for "liebre" a kind of hare or wild rabbit, because once upon a time hare was an appreciated dish, but cats were cheaper/easier to find).

First of all, I got the little sticker installed on my car last week that will allow me to pass through the toll booths electronically, getting an 80% discount. It is good for 2 years. We have surmised that it is difficult to get this approved as a way of discouraging people from getting that discount. But perseverance pays off.

Since this coming weekend marks the change in daylight savings time (clocks turn back 1 hour, at 2 am Sunday morning), we are feeling the transition towards winter. The weather is decidedly growing cooler. Still, we need no heating and leave the windows open through the night to cool the house.

We still have a few projects that need to get finished, but we have been able to enjoy this summer, for the first time, without constantly worrying about getting things done. Strange as it may seem, the upper cabinets in the kitchen have still not been finished. It is about 10 months since the kitchen cabinets were started. Amazing, no? 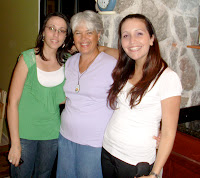 This past weekend we had karaoke night, again. The usual suspects came over Saturday night, after the meeting. It was a smaller group, but we had a purpose.

I have accumulated over 150 Spanish language karaoke songs, and we wanted the group to try them out for us and to find out which songs were popular and which songs were too difficult to sing. It proved to be a big hit. Then they made Denise and I sing a duet in Spanish.

Well, we did better than we thought, but we will not be winning any karaoke contests in any Uruguayan bars (if they have them) any time soon.

But a good time was had by all.
Posted by Wally at 8:01 AM No comments:

Invasion of the Bloodsuckers

The outdoors has been hazardous, the last few days. After the thunderstorms during the past week, the moist environment and warm temperatures have proved to be a mosquitos heaven. Apparently in Montevideo they will be spraying parks over this weekend to mitigate the invasion.

Here, on the coast, it is as bad as I have ever seen it. We are like the old west wagon trains. We are huddled in the house, while outside, "they" circle, waiting for an invitation to come in. Fortunately we have nice, secure screens on all of our windows and sufficient air circulation that allows us to be comfortable, while we are virtually barricaded inside the house. We are even keeping the pets inside, as much as possible.