I don't claim to be a cook but sometimes recipes find me and I feel compelled to pass them along.

That's what happened when I was introduced to the side dish Quinoa at a dinner, the first of this year.

Despite it's being hailed as the new "superfood" back in the USA, I had never heard of the stuff. I wasn't sure if it was a grain or a very fine pasta similar to couscous, or what? Nope! It's a seed!

It's grown high up in the Andes mountains, right here in South America in Ecuador and Bolivia. It can be cultivated at altitudes of 10,000 feet. Unlike me, the Incas knew its value all along calling it, "Chisaya mama" (the mother of all grains), as mentioned in "Mother Nature Network".
Obviously, it's not new at all, but has been enjoying recent popularity.

Click on the above "superfood" link for this and other information on it's nutritional content. It's considered a "superfood" because of it's high protein content and 8 essential amino acids, thus it's great for Vegetarians as an important part of their menu. It contains no gluten or wheat!

What does this have to do with Uruguay? Well, it's sold here in grocery stores and at the feria. After that dinner party, Wally said that he liked the dish and felt we should add it to our home cooked menu. Something other than mashed potatoes or rice or pasta as a starch would be nice. I looked in at our little neighborhood "mom and pop" store (almacen) and sure enough there was a bag of it, 500 grams for 70 pesos (about $3.75). Still, since this was the first time that I was going to make it or try to cook it, I cheapen out at the last minute and didn't want to spend that much for an experiment. How surprised I was to find out that it was also available at the feria, our local weekly farmer's market. 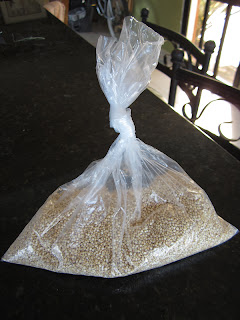 As I was waiting in line at the "Truck" that was selling it, along with the dried prunes and peanuts that I usually buy there, several women saw me peeking at the product in the glass case. Many didn't know what it was either. One woman (also in line) seemed to be in the know and said something in Spanish, to the effect that it could be used, whatever way, you wanted to use it, meaning sweeten or used as a salted dish. I chimed in that someone had served it to me as a side dish instead of rice. So since you can readily buy it here and yet many people don't normally use it, I thought I'd share what I learned on how to prepare and cook it. 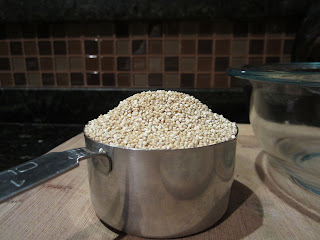 I obviously," Hablé por teléfono" (I called up) the person who first served it to me. Well, that person had used his up and no longer had the package hence the directions. Still, what is great is watching the expat connection spring into action. He emailed another expat and soon I was emailed the directions by that expat! Thanks, Tim!!!

It is vital that you rinse these little seeds again and again! I did it 3 times! The seeds don't look dirty but they have a bitter tasting coating called Saponins which makes it unpalatable.

The interesting thing is that, in North America this coating is usually already rinsed off for the consumers but here in South American countries it's left for you to do that. If you don't rinse it, enough times, the taste is like earthy green slime without the slickness, I was warned about this. The Wikipedia link is really interesting about it's history etc... just click on the link "Saponins", located above in brown.

The seeds start out light colored but the end product (after it's cooked) takes on a golden color. The result is light and fluffy. I think it needs some kind of seasoning though (perhaps a little bit of butter and more salt) because totally plain it has (to me at least) an earthy taste/quality but then again I feel that way about natural brown rice and whole wheat. It's definitely good for you and keeps the menu varied!

Start by
Rinsing and draining. Rinse and drain and rinse and drain!
Bring your water to a boil
add salt to the water (to your liking)
add the drained, washed Quinoa
Bring to a boil again
then lower the heat.
Cover and simmer for 15 minutes!
Eat and Enjoy (it's really fluffy and light)

Note: I cooked 1 cup of the Quinoa in 2 cups of water with a little salt. After it was cooked, I added a little butter and more salt (to my liking). That amount can easily serve 4 people as a side dish.

I'll try and be on the lookout for anymore interesting foodstuffs being sold in those feria trucks and stands.

I would normally say right now, that it just goes to show, you're never too old to try new things, except that today, I went to an Asado/ a BBQ, given by some friends and I "passed" on eating, not only the cow's tongue but also on the salvia glands of a cow! So, instead I'll say, you're never too old to "learn about" something new! Quinoa, you don't have to be daring to try it. Enjoy!