It is a common complaint of expats here that Uruguay does not have spicy food. That is true, the local foods do seem to be rather bland, in comparison with what we are used to. Not as flavored, nor with much, if any spice. I bought a little bottle of Salsa Picante (should have been hot sauce), and it was little more than ketchup with a mild vinegar taste.

So the other day, when I saw this package of "Catalan Picante" at Tienda Inglesa (the big market around here), I imagined that they would be nothing more than slightly spicier bell peppers. After getting them home and trying a bite, they seemed very mild.

Last night I used them for the first time with some bell peppers and chicken breasts. I chopped up three and added them to the mixture. It was a delicious meal, but I can tell you that we just barely had enough rice and milk to offset the fire. Yes, the cooking released some of the hottest hot I have ever tasted.

So, while the local cuisine may not be as spicy as some are used to- it is not for lack of ingredients. I think I will cut and freeze several packages of these and save them for later. And, now, knowing the power of these little peppers, I will add them carefully.
Posted by Wally at 3:53 AM No comments: 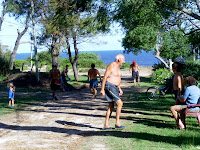 Our neighbors, who live here during the summer months, invited us to a water balloon fight. They provided us with the balloons for us to fill and told us to come over in an hour. Never let it be said that the Wally and Denise back down from a fight (at least with water balloons). Plus it was a nice hot day...

It turns out that the whole neighborhood 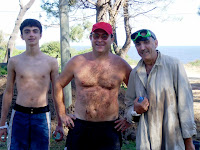 is in on this thing. They had all brought their filled balloons and we met most of the people up and down the street. Most of them have been coming here for 30 years or more. It was a wonderfully friendly group (at least at the outset). We had a nice chat. Many of the neighbors spoke English and were pleased that we are making some progress in Spanish.

After a little glass of bubbly and a snack of flan, we were divided into teams and told to meet back at 5 pm for the showdown. It would be a contest with each team trying to get the other team's flag (T-shirts in this case) back to their side and when you have both flags together, you have won. The first picture shows a mound of dirt at the foot of our driveway(the neighbor called it "Wally's Mountain") that we had delivered today to fill out our garden areas. It was used to hold the flag of the South Team.

The catch is that you have a band of toilet paper tied around your wrist and if they other team takes it off, you are out until you go the the official bander (I just made that up) and get a new one, then you are back in the game.

Denise was on the winning team. Her team had the physical education teacher who made the game up- he was just very athletic. I did make one successful run with the opposing team's flag, but by then they had our flag and it just nullified the point. 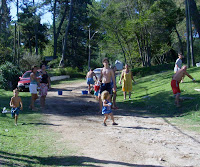 However, on the other hand, aside from that pesky flag thing there was lots and lots and lots of water balloons thrown and burst- on everyone! Now I don't really think there was any point to the water balloons, because it didn't stop you from playing and it never deterred an effort to get the flag. I suspect it was just fun to hit people with water balloons- and we did that! In fact, cars driving down the street and unsuspecting pedestrians were shown no mercy.

After about 30 well played minutes on the field, we all dropped down exhausted (at least those of us in the 60+ age group) and went back to our respective homes. Getting to know our neighbors a little better was just icing on the cake. They do this every year. It was a little confusing, this time- but next year we'll be ready for them.
Posted by Wally at 12:41 PM 1 comment:

Things Are Coming Together

Before telling you about the week, I will show you a very unusual project that we had done. We now have a screen door on our bedroom. It was so weird to have a screen door inside, that Aldo wants to take a picture and show it around (what will those immigrants think of next?). This is very practical, however. We now can leave the door to the bedroom open all night, with little chance of those little bloodsuckers (literally) flying in. The last couple of days have been very very hot, and last night was the first night that the bedroom enjoyed cooler temperatures, thanks to the new door. The carpenter who made the laundry cabinets made it out of a very beautiful wood (cedro mara- though I have no idea what it is) and installed it all for $85, US.

Now on to the rest of the week. Monday saw us at the immigration office to get the final papers, before receiving our cedula (national ID card) and receiving residency status. Once we get that card, we will not have to renew residency for another 3 years. We also received the aduana (customs) paper that will allow us to receive our deposit back, once our cedula is issued. All went smooth and we should get an appointment sometime in the next week or so to actually go to the office that issues the cedula, get photos and fingerprinted (again) and receive the official card.

Now, to our laundry room. It was quite a luxury to have a separate laundry room, since most houses have the washer and dryer in a kitchen or 2nd bathroom. And we have finally had the cabinets made and installed. This carpenter did a fine job and used "cedrino" (once again, I have no idea what that is, but it is beautiful) for the cabinets. He did nice raised panel doors and charged anwhere from $150-$330 less than any other estimates we had gotten. In fact, the cabinet maker who made our ill-fated office desk wanted $150 more for that little set of cabinets. While this is not a perfect job, it suits us nicely. I think we will probably use him for the kitchen (thus saving me the expense and frustration of trying to equip myself for cabinet making and doing the jobs myself).


This has been a lovely week for us, starting with the wonderful flamenco night at the local restaurant. Interior painting is underway, as we speak and interior tile may start next week. We enjoy seeing progress, but we long to have the place completed and to ourselves. As we sat our on the deck last night, listening to the sounds of the surf, with the most brilliant display of stars we could imagine and realized that we are actually living here, in our own place by the beach- we were very thankful, indeed.
Posted by Wally at 4:18 AM No comments:

A Night at the Fort

Denise and I enjoyed a lovely evening out, last night. A local hotel and restaurant in nearby Fortin Santa Rosa (please excuse the quality of the photo, but since it was so late, I just scanned a picture from the bookmark they gave us on the way out) was the site for a night of food and Flamenco music and dancing. 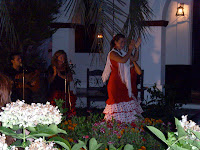 The restaurant is actually a converted fort, complete with large wooden entry doors and a couple of defunct cannons outside. It overlooks the water, but all of the action takes place inside. When you arrive at about 9:30 in the evening, there is seating in the open courtyard, and they served us some Sangria, while waiting for the musicians to set up. The flamenco guitarist was spectacular. He was really something and after a short set, including several songs and a couple of dances by the two girls, we were served some hors d'oeuvres and then ushered inside to our table. It was nicely set and the room had lovely paneling and with the open windows and a nice breeze on the warm night- the setting was perfect.

We had a choice of a rice dish (closer to risotto with some ingredients than the advertised paella) and pork chops. We each tried one. The food would be a disappointment for some (it was the thought that counted), but went very nicely with the bottle of wine provided.

Then the musicians came inside and did another set, this time getting as many as possible to get up and do a little flamenco dancing of their own. We were persuaded and while I am no dancer, Denise, with her decided Latin heritage, put on a pretty good show.

A little dessert and a small glass of cognac (remind me to pass on the cognac, next time) and we were were off for home. Before we left, one of the dancers came over and talked with Denise about her "day job". She is helping a local yarn dealer set up distribution in the US and so enjoyed using her English with us.

We walked home under beautiful starry skies and got back at about 3 in the morning, wondering where the time had gone. While the food was nothing to get excited about, the whole experience was well worth it. Next week is a Tango show- we're going to try and attend.
Posted by Wally at 5:32 AM 1 comment: